Story of the Day: The Origin of Monkeys

Here is today's story: The Origin of Monkeys. This is a Hausa story from Niger; you can read more Hausa stories here, and also more stories about monkeys. 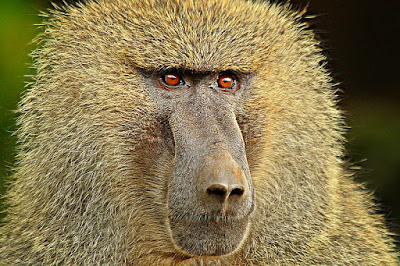 
THE ORIGIN OF MONKEYS

Monkeys in ancient times were men.

When Sunday came again, a certain woman came to the lake to fetch water. She saw many fish, caught some, took the water and went home, and told the men, saying, "You are staying at home, and lying down. See the fish! Many of them came out of the lake to eat something. Go you, catch them, and bring them that we may eat them."

The men answered, "A man of God came, and told us that we should not catch them today, this one day. And the man of God went away and left us."

The woman said, "If you do not go to catch fish, we shall not love you."

The men said, "Our wives hate us, because we refuse to catch fish. Let us go to catch some."

When they had gone and caught plenty, and were bringing them home, the man of God returned and said to them. "Did you not hear the word which I told you?"

The men answered, "We heard it, but our wives would not hear it."

He said to them, "Verily I said to you, that you should not catch fish on a Sunday." He therefore said to them, "God will take away from you some blessing; you will be turned into something else, and go into the forest."

So they were changed, and got tails, and walked on their hands and on their feet, touching the ground as they were walking.

This it is, so I heard it, and told it to you; whether it is a lie or a truth, I do not know. I also heard that some white men say that at first men were monkeys, and by degrees became men.

Story Title: The Origin of Monkeys
Book Title: Magana hausa: Native literature or proverbs, tales, fables and historical fragments in the Hausa language
Author: James Frederick Schon
Published: 1886
Rights: CC0 Public Domain
Online Source: Hathi
Process: Light editing for paragraphing and punctuation, and I have changed ye, thee, thou to you.
Additional Notes: This is a Hausa story from Niger; you can read more about the Hausa language at Wikipedia.