Story of the Day: The Ball Game of the Birds and Animals

Here is today's story: The Ball Game of the Birds and Animals. This is a Cherokee story; here are some more Cherokee stories, and also some more stories about bats. You can learn more about Cherokee stickball at Wikipedia. 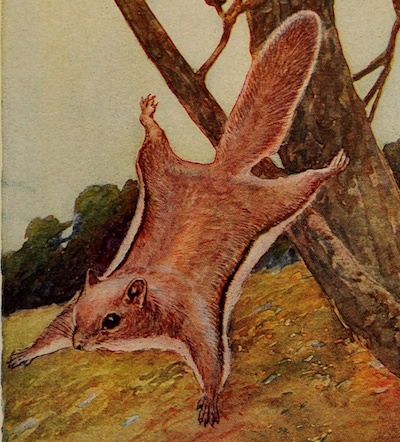 HOW THE BAT AND FLYING SQUIRREL GOT WINGS, AND THE MARTIN GOT A NEST
Once the animals challenged the birds to a great ballplay, and the birds accepted. The leaders made the arrangements and fixed the day, and when the time came both parties met at the place for the ball dance, the animals on a smooth grassy bottom near the river and the birds in the treetops over by the ridge.

The captain of the animals was the Bear, who was so strong and heavy that he could pull down anyone who got in his way. All along the road to the ball ground he was tossing up great logs to show his strength and boasting of what he would do to the birds when the game began.

The Terrapin, too--not the little one we have now, but the great original Terrapin--was with the animals. His shell was so hard, that the heaviest blows could not hurt him, and he kept rising up on his hind legs and dropping heavily again to the ground, bragging that this was the way he would crush any bird that tried to take the ball from him.

Then there was the Deer, who could outrun every other animal. Altogether it was a fine company.

The birds had the Eagle for their captain, with the Hawk and the great Tlä'nuwä, all swift and strong of flight, but still they were a little afraid of the animals.

The dance was over and they were all pruning their feathers up in the trees and waiting for the captain to give the word when here came two little things hardly larger than field mice climbing up the tree in which sat perched the bird captain. At last they reached the top, and creeping along the limb to where the Eagle captain sat they asked to be allowed to join in the game.

The captain looked at them, and seeing that they were four-footed, he asked why they did not go to the animals, where they belonged. The little things said that they had, but the animals had made fun of them and driven them off because they were so small. Then the bird captain pitied them and wanted to take them.

But how could they join the birds when they had no wings? The Eagle, the Hawk, and the others consulted, and at last it was decided to make some wings for the little fellows. They tried for a long time to think of something that might do, until someone happened to remember the drum they had used in the dance. The head was of ground-hog skin and maybe they could cut off a corner and make wings of it. So they took two pieces of leather from the drumhead and cut them into shape for wings, and stretched them with cane splints and fastened them onto the forelegs of one of the small animals, and in this way came Tla'mehä, the Bat.

They threw the ball to the Bat and told him to catch it, and by the way he dodged and circled about, keeping the ball always in the air and never letting it fall to the ground, the birds soon saw that he would be one of their best men.

Now they wanted to fix the other little animal, but they had used up all their leather to make wings for the Bat, and there was no time to send for more. Somebody said that they might do it by stretching his skin, so two large birds took hold from opposite sides with their strong bills, and by pulling at his fur for several minutes they managed to stretch the skin on each side between the fore and hind feet, until they had Tewa, the Flying Squirrel.

To try him the bird captain threw up the ball, when the Flying Squirrel sprang off the limb after it, caught it in his teeth and carried it through the air to another tree nearly across the bottom.

When they were all ready the signal was given and the game began, but almost at the first toss the Flying Squirrel caught the ball and carried it up a tree, from which he threw it to the birds, who kept it in the air for some time until it dropped. The Bear rushed to get it, but the Martin darted after it and threw it to the Bat, who was flying near the ground, and by his dodging and doubling kept it out of the way of even the Deer, until he finally threw it in between the posts and won the game for the birds.

The Bear and the Terrapin, who had boasted so of what they would do, never got a chance even to touch the ball.

For saving the ball when it dropped, the birds afterwards gave the Martin a gourd in which to build his nest, and he still has it. 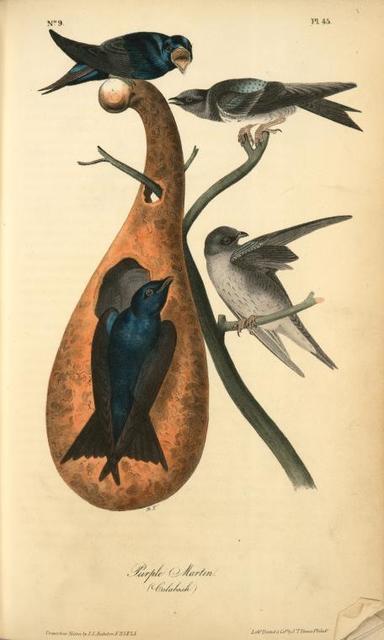