Bengal: The Evil Eye of Sani

The author explains the name Sribatsa in a note: "Sri is another name of Lakshmi, and batsa means child; so that Sribatsa is literally the 'child of fortune.'"

[Notes by LKG]
This story is part of the Bengali Folktales unit. Story source: Folk-Tales of Bengal by the Rev. Lal Behari Day, with illustrations by Warwick Goble (1912). 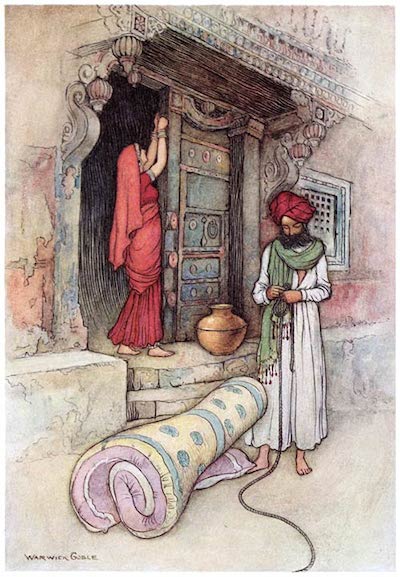 The Evil Eye of Sani

Once upon a time Sani, or Saturn, the god of bad luck, and Lakshmi, the goddess of good luck, fell out with each other in heaven. Sani said he was higher in rank than Lakshmi, and Lakshmi said she was higher in rank than Sani. As all the gods and goddesses of heaven were equally ranged on either side, the contending deities agreed to refer the matter to some human being who had a name for wisdom and justice.

Now, there lived at that time upon earth a man of the name of Sribatsa who was as wise and just as he was rich. Him, therefore, both the god and the goddess chose as the settler of their dispute. One day, accordingly, Sribatsa was told that Sani and Lakshmi were wishing to pay him a visit to get their dispute settled.

Sribatsa was in a fix. If he said Sani was higher in rank than Lakshmi, she would be angry with him and forsake him. If he said Lakshmi was higher in rank than Sani, Sani would cast his evil eye upon him. Hence he made up his mind not to say anything directly, but to leave the god and the goddess to gather his opinion from his action. He got two stools made, the one of gold and the other of silver, and placed them beside him. When Sani and Lakshmi came to Sribatsa, he told Sani to sit upon the silver stool, and Lakshmi upon the gold stool.

Sani became mad with rage and said in an angry tone to Sribatsa, “Well, as you consider me lower in rank than Lakshmi, I will cast my eye on you for three years, and I should like to see how you fare at the end of that period.” The god then went away in high dudgeon.

Lakshmi, before going away, said to Sribatsa, “My child, do not fear. I’ll befriend you.”

The god and the goddess then went away.

Sribatsa said to his wife, whose name was Chintamani, “Dearest, as the evil eye of Sani will be upon me at once, I had better go away from the house, for if I remain in the house with you, evil will befall you and me, but if I go away, it will overtake me only.”

Chintamani said, “That cannot be. Wherever you go, I will go; your lot shall be my lot.”

The husband tried hard to persuade his wife to remain at home, but it was of no use. She would go with her husband. Sribatsa accordingly told his wife to make an opening in their mattress and to stow away in it all the money and jewels they had.

On the eve of leaving their house, Sribatsa invoked Lakshmi, who forthwith appeared. He then said to her, “Mother Lakshmi! as the evil eye of Sani is upon us, we are going away into exile. but do thou befriend us, and take care of our house and property.”

The goddess of good luck answered, “Do not fear: I’ll befriend you; all will be right at last.”

They then set out on their journey. Sribatsa rolled up the mattress and put it on his head. They had not gone many miles when they saw a river before them. It was not fordable, but there was a canoe there with a man sitting in it. The travellers requested the ferryman to take them across.

The ferryman said, “I can take only one at a time. but you are three—yourself, your wife, and the mattress.” Sribatsa proposed that first his wife and the mattress should be taken across, and then he, but the ferryman would not hear of it.

“Only one at a time,” repeated he; “first let me take across the mattress.”

When the canoe with the mattress was in the middle of the stream, a fierce gale arose, and carried away the mattress, the canoe, and the ferryman, no one knows whither. And it was strange the stream also disappeared, for the place, where they saw a few minutes since the rush of waters, had now become firm ground. Sribatsa then knew that this was nothing but the evil eye of Sani.