Story of the Day: Why the Skunk Walks Alone

Here is today's story: Why the Skunk Walks Alone. This is a story of the Hasinai people (Caddo), who live in what is now Texas. You can read more Hasinai legends, and also more legends about skunks. 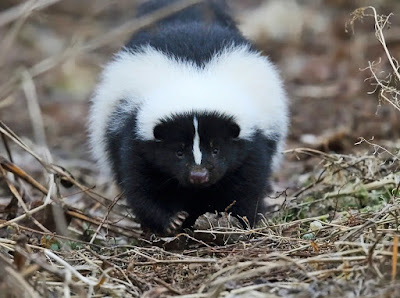 WHY THE SKUNK WALKS ALONE

When the Great Spirit made the first skunk he gave him fur spotted with black and white to help hide him from his enemies. If the skunk stood still in the shadows at night nothing could see him, and he was safe.

But he was not satisfied. He was still afraid, and he asked the Great Spirit for something more. This time the skunk was given sharper teeth and longer claws.

Now he was a truly terrible little fellow. Nobody could see him in the dark, and nobody knew the skunk was around until he felt sharp teeth and long claws biting and scratching. The other creatures of the woods and prairie began to fear the skunk, the animal which wanders around looking for his food when the sun has gone to bed and the stars have come out.

But still the skunk complained. He wanted something more, something that would make everything run from him.

This made the Great Spirit angry. He had done much for the little black and white animal, but the skunk was not satisfied. What the Great Spirit did now was to give the skunk a powerful smell. This smell was so strong that when the skunk's friends found out he had it they ran from him as quickly as his enemies did.

That is why the skunk goes alone today. Dogs and birds and snakes and men all dislike his smell, and so they leave him by himself.