Story of the Day: Why Arrows Have Feathers

Here is today's story: Why Arrows Have Feathers. This is a story of the Hasinai people (Caddo), who live in what is now Texas. You can read more Hasinai legends, and also more Native American legends about hawks. 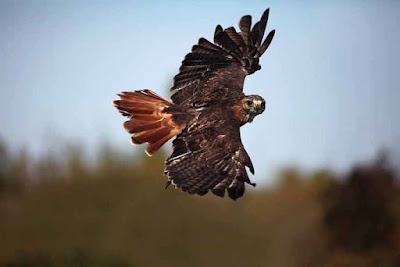 
WHY ARROWS HAVE FEATHERS

A baby hawk once fell from its nest in a high tree and lay on the ground, too young to fly. The little bird would have soon died from lack of food, or it would have been caught by an animal and eaten, if an Indian boy had not found it.

The boy took the young hawk home with him and cared for the bird. He made it a nest on the top of a stump and fed the bird day after day until it at last was ready to fly, but the hawk did not leave. It liked the Indian boy who had saved its life. When the boy was playing around in the village the hawk sat on the stump where it had been raised and watched him.

One day the young Indian was making arrows from slim branches of trees and shooting them from his bow. At that time Indians did not put feathers on their arrows. Each time the boy shot an arrow it would fly straight for a little way and then turn over and over.

The hawk saw this and had an idea. Why could not one of its wing feathers make an arrow fly straight? The bird could not talk to the boy, but it pulled out a long feather and dropped it at the boy's feet upon one of the arrows that lay on the ground. The boy paid no attention to the feather. Then the hawk dropped another and whistled. So the young Indian saw that the hawk was trying to tell him something about the feathers. He picked up one that lay on the arrow at his feet, fastened it to the blunt end of the arrow and aimed at a tree far away. This time the arrow flew straight as the hawk.

The Indians in the village gave a great shout, for at last they had found out how to make their arrows fly straight through the air.