Story of the Day: Why Brer Fox's Legs Are Black

Here is today's story: Why Brer Fox's Legs Are Black. Here are some more stories collected by Joel Chandler stories, including more of his stories with fox and rabbit. 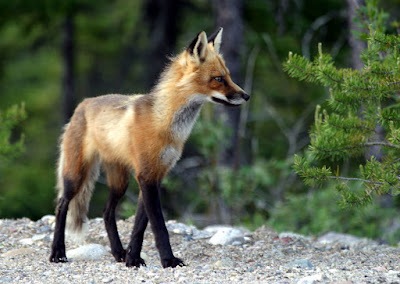 WHY BRER FOX'S LEGS ARE BLACK

One time Brer Rabbit and Brer Fox went out in the woods hunting, and after so long a time, they begun to get hungry. Least ways Brer Fox did, 'cause Brer Rabbit had brung a ashcake in his wallet, and every time he got a chance he'd eat a mouthful — every time Brer Fox'd turn his back, Brer Rabbit'd nibble at it.

Well, enduring of the day, Brer Fox begun to get mighty hungry. They had some game what they done kill, but they was a far ways from home, and they ain't had no fire for to cook it.

They ain't know what to do. Brer Fox so hungry it make his head ache. By and by the sun begun to get low, and it shine red through the trees.

Brer Rabbit allow, "Yonder where you can get some fire."

Brer Rabbit allow, "Down where the sun is. She'll go in her hole directly, and then you can get a big chunk of fire. Just leave your game here with me, and go get the fire. You are the biggest and the swiftest, and can go quicker.

With that Brer Fox put out to where the sun is. He trot, he lope, and he gallup, and by and by he get there. But by that time the sun done gone down in her hole and the ground, for to take a night's rest, and Brer Fox he can't get no fire. He holler and holler, but the sun ain't pay no attention. then Brer Fox get mad and say he going to stay there till he gets some fire. So he lay down top of the hole, and 'fore he knowed it he dropped asleep. That he was, and there where he got caught.

Now you know mighty well the sun pleased to rise. and when she start to rise, there was Brer Fox fast asleep right up on top of the hole where she got to rise from. When that the case, something or other pleased to happen. The sun rise up, and when she find Brer Fox in the way, she het him up and scorch his legs till they got right black. They got black, and they are black to this very day.