Story of the Day: Why Brer Bull Growls and Grumbles

Here is today's story: Why Brer Bull Growls and Grumbles. Here are some more stories collected by Joel Chandler stories, including more of his stories focused on human characters. 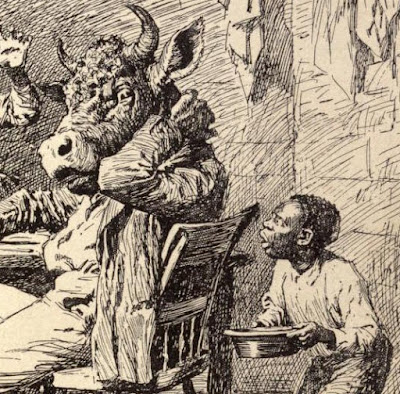 illustration by A. B. Frost

WHY BRER BULL GROWLS AND GRUMBLES

That put me in mind of the time when old Brer Bull change hisself into a man and went 'round courting. Whiles he was going on this a-way, he come 'cross a woman which he like her looks mighty well, and seem like she like him.

Well, sir, Brer Bull, he'd graze 'round in the pasture all night, and in the daytime he'd turn to be a man and call on the woman, and cast sheep-eyes at her, and tell her right point-blank how pretty she is. It kept on this away till by and by the woman got so she can't do nothing at all without running over in her mind 'bout this here nice man what coming courting. She can't scarcely cook dinner. She'd lift the ladle for to stir the pot, and hold it in the air a minute, and then — belingy-bang-dang ! — it'd drop on the floor. She can't keep away from the looking-glass, a-brushing her hair and plastering down her beau-catchers.

Now, then, there was a little boy living there with the woman. He was sharp as a bamboo brier, and his foot was light and quick as old Brer Rabbit hisself. He watch mighty close. He notice that when the man was courting, there weren't no Brer Bull in the pasture, and when there weren't no man a-courting, there was Brer Bull grazing 'round. He got behind a persimmon tree, the little boy did, and watch how Brer Bull change hisself. He watch, and he see Brer Bull sit down on his hunkers just like a dog. Then he'd shake his head and say, "Ballyhaloo-bill!" With that his horns'd shrink, and his tail'd shrivel, and most 'fore you can bat your eye there he'd stand changed into a man. Then the little boy'd slip back to the house, and pick up chips for to put on the oven-lid to bake bread.

By and by the little boy got so uneasy that he don't eat much. He was scared the woman going to marry Brer Bull. And sure enough, that just exactly what the woman laid off to do. When the boy see that, he just up and tell the woman all about it, but instead of believing him, she got mad, and come mighty nigh snatching him bald-headed. But the boy, he watch, and keep on watching, and by and by he hear what the man say when he change back into Brer Bull.

So, one day, whiles the man eating dinner at the woman house, the boy hand 'round the vittles, and when he come to the man, he say, "Billybaloo-bal!"

The man looked scared and put his hands up to his head, but it ain't do no good; he horns done begun to grow, and hoofs come out on his hands and foots, and the clothes drop off, and most 'fore the man can get out of the door, he done change into Brer Bull, and he curl his tail top of his back and rush out to the pasture.

Well, the woman make humble apology to the boy, but he rub hisself in the neighborhoods of the coat-tails where she spank him. I been living 'round here a mighty long time, but I ain't never see no apology what was poultice or plaster enough for to assuage a swelling or cure a bruise.

That boy was name Simmy-Sam, and he was more sharper than what folks took him to be. His common sense done tell him that after he make that exposure 'bout Brer Bull he'd have to keep his weather eye open. So he slip off to where his mammy live at, and she give him a little bundle of flapjacks, and told him to go back and 'tend to his business, and keep out of Brer Bull's way.

Old Brer Bull was grazing in the pasture just like nothing ain't happen, but he keep on the watch. When he'd see Simmy-Sam anywheres out of the yard, Brer Bull'd sort of feed towards him, but Simmy-Sam weren't taking no chances, and he kept close to cover.

But critters is more patient-like than what folks is, and by and by it got so that Simmy-Sam'd go further and further from the house, and one day the woman sent him out in the woods after some pine kindling, and he got to playing and fooling 'round. You know how chillun is, and how they will do: well, that just the way Simmy-Sam done. He just frolicked 'round out there in the brush, till by and by he hear old Brer Bull come a-ripping and a-snorting through the woods! It about looked like his time was up.

Well, sir, there was Simmy-Sam, yonder was a tree, and here come Brer Bull. Now, in a case of that kind, what Simmy-Sam going do? 'Fore you can ask the question, he just shinned up the tree like one of these here rusty-back lizards. Brer Bull come up and hit the tree with his horns — kerblip! But it ain't do no good. He walk 'round and switch his tail and shake his head, but Simmy-Sam just laugh at him. Brer Bull back, he did, and hit the tree with his horns — kerblam! It ain't do no good.

He kept on this away till he got plumb tired, and then he stop to rest. After he got his wind back, he sat down, he did, and change hisself into a man, and the man had a axe. Then Simmy-Sam get scared, 'cause he know that when the axe start to talk, that tree got to come down. The man look up, and sort of grin.

Man allow, "You better come down and save me the trouble of cutting down the tree."

Man allow, "Scared or no scared, you better come down."

Simmy-Sam say, "Cut some first, and lemme see how it feel."

With that, the man let in to cutting hard as he can — blap! blip! blip! blap! 'Bout that time, Simmy-Sam, whiles he was feeling in his pocket for his handkerchief so he can wipe the water out of his eyes, come 'cross the little bundle of flapjacks what his mammy give him. He unroll the bundle, and there was three of 'em in there. He took one of 'em, he did, and drop it down on the man, and one of the man's arms fall off. The man ain't wait to put the arm back on; he just took the ax in one hand and kept on chopping hard as he can.

Simmy-Sam see this, and he make haste and drop another flapjack. It no sooner drop than the man's other arm fall off. There he was — ain't got no arms, and can't do no cutting. Look like nobody can be scared of him when he in that kind of fix. But Simmy-Sam feared the man can run at him and fall top of him. So then, to make sure, he dropped the last flapjack, and the man head fell off. With that, Simmy-Sam climb down the tree, and took his foot in his hand and put out for home. (When anybody run fast, they say he done took his foot in his hand.)

'Course it weren't no man. Old Brer Bull had just change hisself into a man, and how can it be a sure enough man? After Simmy-Sam done got out of sight, Brer Bull got his man parts together just like a jointed snake does, and then he change hisself back to his own self, and he done stay that away, 'cause he feared that some little chap or another will come 'long and fling a battercake at him.

And more than that, he been going 'long from that day to this, holding his head down and growling and grumbling like something or other done hurted his feelings. And if you'll notice right close, he don't like for no youngsters for to come fooling 'round where he stay at. 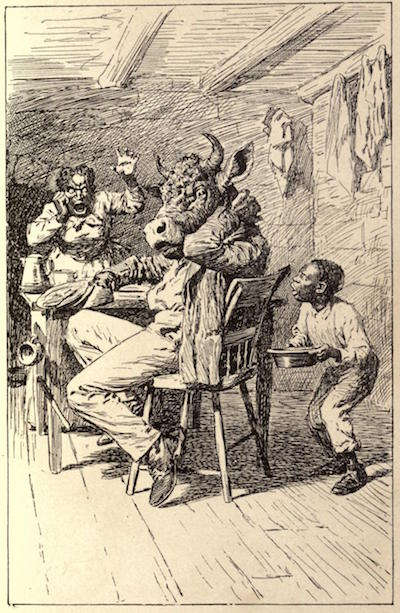