The French writer Charles Perrault was one of the first authors of "literary" fairy tales, and he told many stories that will be familiar to you already — such as Cinderella and Little Red Riding Hood — along with some wonderful stories that you may not know already, like Blue Beard.

Research Tip: You will find background about Perrault at Wikipedia, and you can find the actual fairy tales in this book online: The Fairy Tales of Charles Perrault translated by R. Samber and J.E. Mansion (with illustrations by Harry Clarke). There is also a nice presentation of the Perrault fairy tales at Sur La Lune. If you work with one of Perrault's longer stories, you could actually build a Storybook just about that one story, like his stories of Puss-in-Boots, Little Thumb, Donkey-Skin, or Blue Beard. 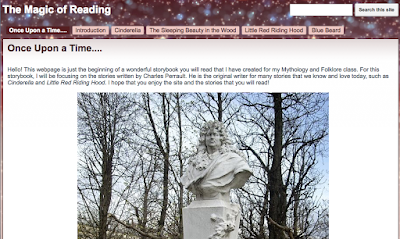