Story of the Day: The Elephant-Fighting Hare

This is another story for the Elephant unit! It's another story from India, this time from Indian Fables and Folklore by Shovona Devi (1919) — it's The Elephant-Fighting Hare. It's a wonderful story about a trickster hare who not only outwits an elephant: he outwits the whole elephant herd! 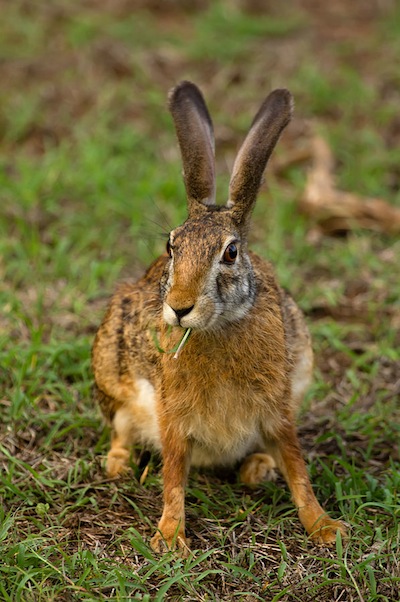 Once upon a time, a little hare saw a herd of elephants in a wood and challenged their leader to a fight, but the latter went on breaking off branches and putting these into his capacious mouth, only now and then winking at the hare out of the corner of one eye.

The hare thought the elephant was unwilling to fight, so he called him a coward. The elephant then lost his temper and went straight at the saucy little thing with trunk up, bellowing, but the hare, with the characteristic nimbleness of its race, kept dodging him about, slipping in and out, round and under him, among his legs.

All of a sudden the mighty animal flung himself down, as if to crush his puny enemy under his Juggernaut weight, but the hare slipped out by his tail and, clambering on to the elephant's back, lay down there quietly.

The elephant, no more conscious of its presence than the wheel was of the fly sitting on it, still kept pressing himself to the ground, as if to crush to pulp the impudent hare supposed to be beneath him.

The other elephants, seeing the hare lying on the back of their leader, fancied it must be keeping him down by superior physical force, so they became frightened and bolted.

The leader of the herd, finding himself thus deserted by his companions and tormented by an army of ants that his gusty breathing had drawn into his nostrils, then rose and dashed away. Thus were the elephants vanquished by the hare.