Story of the Day: Holy Book — The Origin of the Torah

This astounding legend comes from The Legends of the Jews by Louis Ginzberg (1909), and it is part of the Noah unit. It's included in the Noah unit because the holy book described here will ultimately pass down from Adam to Enoch to Noah, and the wisdom of the book will guide Noah in building the ark.

The character of Samael whom you will meet in this story is a mysterious figure in Jewish tradition; you can read more about him at Wikipedia. One of his roles is to be the angel of death, but some scholars have identified him as the angel who restrained Abraham's hand to stop him from sacrificing his own son Isaac. The story below contains a legend about Samael's own son and the terrible events that ensue when he asks Eve to babysit the boy! 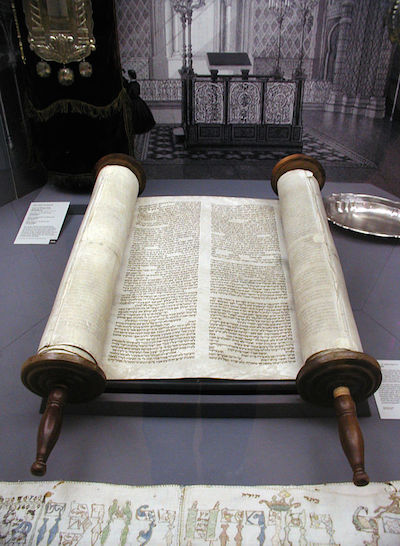 
While the first human pair were still in Paradise, it once happened that Samael, accompanied by a lad, approached Eve and requested her to keep a watchful eye upon his little son until he should return. Eve gave him the promise.

When Adam came back from a walk in Paradise, he found a howling, screaming child with Eve, who, in reply to his question, told him it was Samael's.

Adam was annoyed, and his annoyance grew as the boy cried and screamed more and more violently. In his vexation he dealt the little one a blow that killed him. But the corpse did not cease to wail and weep, nor did it cease when Adam cut it up into bits.

To rid himself of the plague, Adam cooked the remains, and he and Eve ate them.

Scarcely had they finished, when Samael appeared and demanded his son. The two malefactors tried to deny everything; they pretended they had no knowledge of his son. But Samael said to them, "What! You dare tell lies, and God in times to come will give Israel the Torah in which it is said, 'Keep thee far from a false word'?"

Samael departed, but Adam was sore grieved, and he put on sackcloth and ashes, and he fasted many, many days, until God appeared unto him, and said, "My son, have no fear of Samael. I will give thee a remedy that will help thee against him, for it was at My instance that he went to thee."

Adam asked, "And what is this remedy?"

Adam:,"And where is the Torah?"

God then gave him the book of the angel Raziel, which he studied day and night. After some time had passed, the angels visited Adam, and, envious of the wisdom he had drawn from the book, they sought to destroy him cunningly by calling him a god and prostrating themselves before him, in spite of his remonstrance, "Do not prostrate yourselves before me, but magnify the Lord with me, and let us exalt His Name together."

However, the envy of the angels was so great that they stole the book God had given Adam from him, and threw it in the sea. Adam searched for it everywhere in vain, and the loss distressed him sorely.

Again he fasted many days, until God appeared unto him, and said, "Fear not! I will give the book back to thee," and He called Rahab, the Angel of the Sea, and ordered him to recover the book from the sea and restore it to Adam. And so he did.
Posted by Laura Gibbs