This story follows up on events from an earlier story, when Brer Rabbit disguised himself as a frog in order to fool Brer Bear; that happened at the end of this story in the other Brer Rabbit unit: Mr. Rabbit and Mr. Bear.

Brer Bear, he took a notion that old Brer Bull-Frog was the man what fool him, and he say that he'd come up with him if it was a year afterwords. But it wasn't no year, and it wasn't no month, and more than that, it wasn't scarcely a week, when by and by one day Brer Bear was going home from the taking of a bee-tree, and lo and beholds, who should he see but old Brer Bull-Frog sitting out on the edge of the mud-muddle fast asleep! Brer Bear drop his axe, he did, and creep up, and reach out with his paw, and scoop old Brer Bull-Frog in just this away. He scoop him in, and there he was. 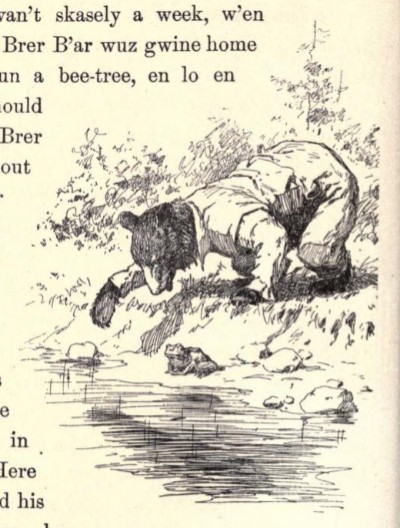 
When Brer Bear got his clampers on him good, he sat down and talk at him. "Howdy, Brer Bull-Frog, howdy! And how your family? I hope they are well, Brer Bull-Frog, 'cause this day you got some business with me what'll last you a mighty long time."

Old Brer Bear he keep running on, "You are the man what took and fool me about Brer Rabbit the other day. You had your fun, Brer Bull-Frog, and now I'll get mine."

Then Brer Bull-Frog, he begin to get scared, he did, and he up and say, "What I been doing, Brer Bear? How I been fooling you?" 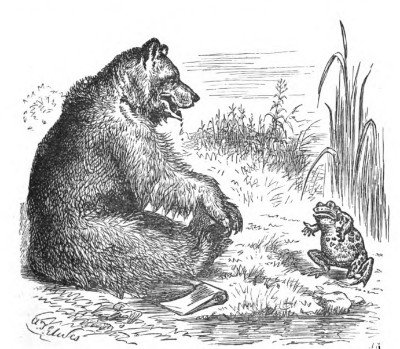 
Then Brer Bear laugh, and make like he don't know, but he keep on talking. "'Oh, no, Brer Bull-Frog! You ain't the man what stick your head up out of the water and tell me Brer Rabbit done gone on by. Oh, no! You ain't the man. I bound you ain't. About that time, you was at home with your family, where you always is. I don't know where you was, but I knows where you is, Brer Bull-Frog, and it's you and me for it. After the sun goes down this day you don't fool no more folks going along this road."

Course, Brer Bull-Frog don't know what Brer Bear driving at, but he know something had to be done, and that mighty soon, 'cause Brer Bear begun to snap his jaws together and foam at the mouth, and Brer Bull-Frog holler out, "Oh, pray, Brer Bear! Let me off this time, and I won't never do so no more. Oh, pray, Brer Bear! Do let me off this time, and I'll show you the fattest bee-tree in the woods."

Old Brer Bear, he chomp his toothies and foam at the mouth.

By and by old Brer Bull-Frog, he sort stop his crying and his boo-hooing, and he up and say, "If you going to kill me, Brer Bear, carry me to that big flat rock out there on the edge of the mill-pond, where I can see my family, and after I see 'em, then you can take your axe and squish me."

This look so fair and square that Brer Bear he agree, and he take old Brer Bull-Frog by one of his behind legs, and sling his axe on his shoulder, and off he put for the big flat rock.

When he get there he lay Brer Bullfrog down on the rock, and Brer Bull-Frog make like he looking 'round for his folks. 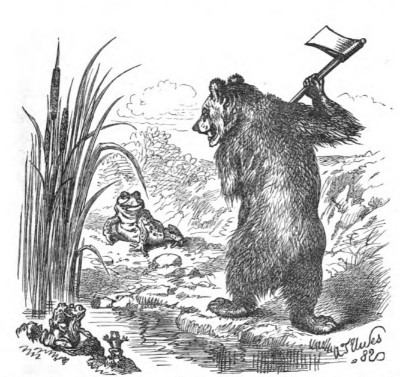 
Den Brer Bear, he draw long breath and pick up his axe. 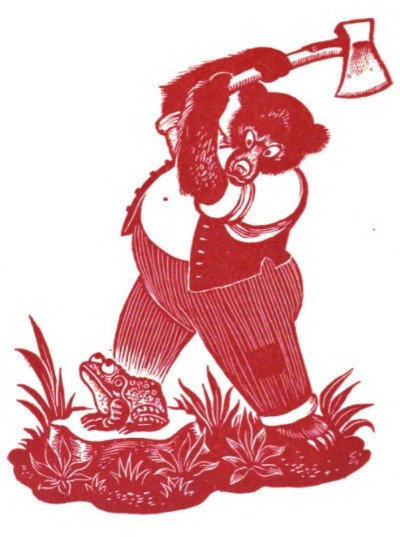 
Then he spit in his hands and draw back and come down on the rock—pow! 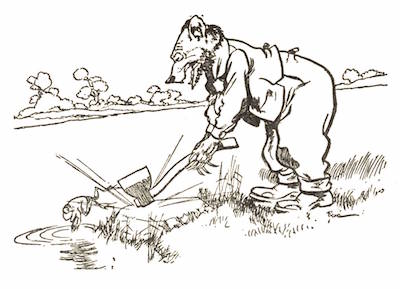 'Twixt the time when Brer Bear raise up with his axe and when he come down with it, old Brer Bull-Frog he leaped up and dove down in the mill-pond, kerblink-kerblunk! 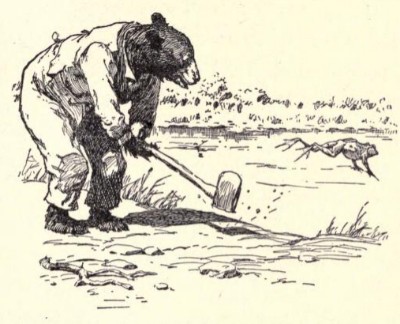 
And when he riz way out in the pond he riz a-singing, and this here's the song what he sing:


A funny song now, I expect, but it weren't funny in them days, and it wouldn't be funny now if folks know'd much about the Bull-Frog language as they used to. That's what. 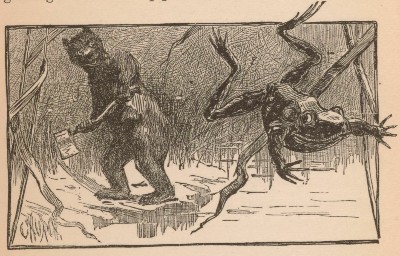 Next: How Mr. Rabbit Lost His Fine Bushy Tail