This story is part of the Europa unit. Story source: Europa's Fairy Book by Joseph Jacobs and illustrated by John Batten (1916).

No sooner had the children seen this funny little house than they rushed up to it, and commenced to pick pieces off the door, and take out some of the bricks, while Johnnie climbed on Grizzle's back and tore off some of the roof (what was that made of?).

Just as they were eating all this, the door opened, and a little old woman, with red eyes, came out and said, "Naughty, naughty children to break up my house like that. Why didn't you knock at the door and ask to have something, and I would gladly give it to you?"

"Please ma'am," said Johnnie, "I will ask for something; I am so, so hungry, or else I wouldn't have hurt your pretty roof."

"Come inside my house," said the old woman and let them come into her parlour. And that was made all of candies, the chairs and table of maple-sugar, and the couch of cocoanut. But as soon as the old woman got them inside her door, she seized hold of Johnnie and took him through the kitchen, and put him in a dark cubby-hole, and left him there with the door locked.

Now this old woman was a witch who looked out for little children, whom she fattened up and ate. So she went back to Grizzle, and said, "You shall be my little servant and do my work for me, and, as for that brother of yours, he'll make a fine meal when he's fattened up."

So this witch kept Johnnie and Grizzle with her, making Grizzle do all the housework, and every morning she went to the cubby-hole in which she kept Johnnie and gave him a good breakfast, and later in the day a good dinner, and at night a good supper, but after she gave him his supper she would say to him, "Put out your forefinger," and when he put it out the old witch, who was nearly blind, felt it and muttered, "Not fat enough yet!" 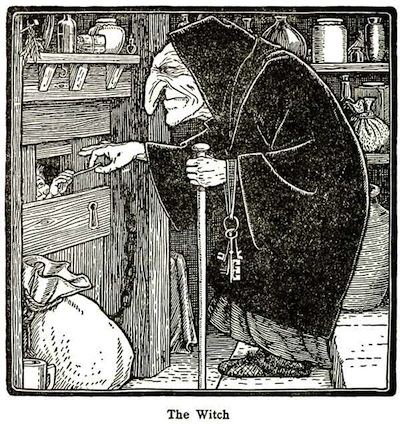 After a while Johnnie felt he was getting real fat and was afraid the witch would eat him up. So he searched about till he found a stick about the size of his finger, and when the old witch asked him to put out his finger, he put out the stick, and she said, "Goodness gracious me, the boy is as thin as a lath! I must feed him up more."

So she gave him more and more food, and every day he put out the stick till at last one day he got careless, and when she took the stick, it fell out of his hand, and she felt what it was. So she flew into a terrible rage and called out, "Grizzle, Grizzle, make the oven hot. This lad is fat enough for Christmas."

Poor Grizzle did not know what to do, but she had to obey the witch. So she piled the wood on under the oven and set it alight. And after a while the old witch said to her, "Grizzle, Grizzle, is the oven hot?"

And when the witch asked her again whether it was hot enough, Grizzle said, "I do not know how hot an oven ought to be."

"Get away, get away," said the old witch; "I know, let me see." And she poked her old head into the oven. Then Grizzle pushed her right into the oven and closed the door and rushed out into the back yard and let Johnnie out of the cubby-hole.

Then Johnnie and Grizzle ran away towards the setting sun where they knew their own house was, till at last they came to a broad stream too deep for them to wade. But just at that moment they looked back, and what do you think they saw? The old witch, by some means or other, had got out of the oven and was rushing after them. What were they to do? What were they to do?

Suddenly Grizzle saw a fine big duck swimming towards them, and she called out:

And the duck said, "Quack! Quack!"

Then the duck came up to the bank, and Johnnie and Grizzle went into the water and, by resting their hands on the duck's back, swam across the stream just as the old witch came up.

At first she tried to make the duck come over and carry her, but the duck said, "Quack! Quack!" and shook its head. 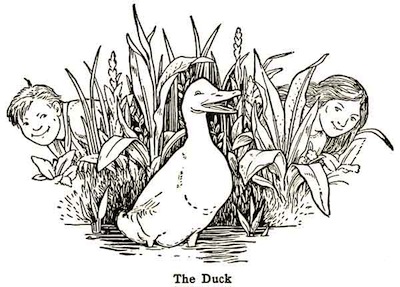