Mr. Turkey Buzzard was guarding the hollow where Brer Rabbit went in at, and which he come out of. Well, Mr. Buzzard, he feel mighty lonesome, he did, but he done promised Brer Fox that he'd stay, and he determined for to sort of hang around and join in the joke.

And he ain't had to wait long, neither, 'cause by and by here come Brer Fox galloping through the woods with his axe on his shoulder. "How you expect Brer Rabbit getting on, Brer Buzzard?" says Brer Fox, says he.

"Oh, he in there," says Brer Buzzard, says he. "He mighty still, though. I expect he taking a nap," says he.

"Then I'm just in time for to wake him up," says Brer Fox, says he. And with that he fling off his coat, and spit in his hands, and grab the axe. Then he draw back and come down on the tree—pow! 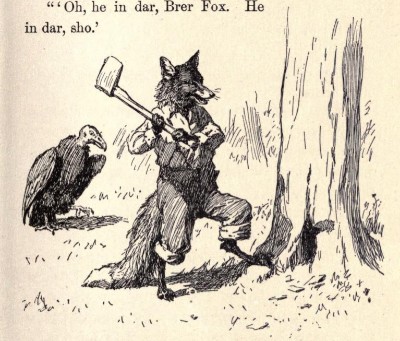 And every time a chip'd fly off, Mr. Buzzard, he'd jump, and dodge, and hold his head sideways, he would, and holler, "He in there, Brer Fox. I done heared him. He in there, sure." 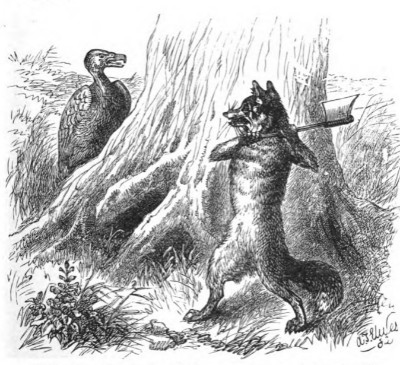 And every time a chip'd fly off, Mr. Buzzard, he'd jump, and dodge, and hold his head sideways, he would, and holler, "He in there, Brer Fox. I done heared 'im. He in there, sure."

And Brer Fox, he lammed away at that hollow tree, he did, like a man mauling rails, till by and by, after he done got the tree most cut through, he stop for to catch his breath, and he seed Mr. Buzzard laughing behind his back, he did, and right then and there, without going any further, Brer Fox, he smelt a rat.

But Mr. Buzzard, he keep on hollering, "He in there, Brer Fox. He in there, sure. I done seed him." 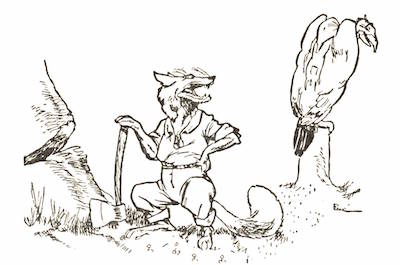 Then Brer Fox, he make like he peeping up the hollow, and he say, says he, "Run here, Brer Buzzard, and look if this ain't Brer Rabbit's foot hanging down here."

And Mr. Buzzard, he come stepping up, he did, same as if he were treading on cockle-burrs, and he stick his head in the hole; and no sooner did he done that than Brer Fox grab him. Mr. Buzzard flap his wings, and scramble 'round right smartually, he did, but it weren't no use. Brer Fox had the advantage of the grip, he did, and he held him right down to the ground.

Then Mr. Buzzard squall out, says he, "Let me alone, Brer Fox. Turn me loose," says he; "Brer Rabbit'll get out. You are getting close at him,' says he, "and eleven more licks'll fetch him," says he.

"Let me alone, Brer Fox," says Mr. Buzzard, says he; "my old woman waiting for me. Brer Rabbit in there," says he.

"There's a bunch of his fur on that black-berry bush," says Brer Fox, says he, "and that ain't the way he come," says he.

Then Mr. Buzzard up and tell Brer Fox how it was, and he allowed, Mr. Buzzard did, that Brer Rabbit was the lowdownest whatshisname what he ever run up with.

Then Brer Fox say, says he, "That's neither here nor there, Brer Buzzard," says he. "I left you here for to watch this here hole, and I left Brer Rabbit in there. I comes back and I finds you at the hole and Brer Rabbit ain't in there," says he. "I'm going to make you pay for it. I done been tampered with till plumb down to the sapsucker'll sit on a log and sassy me. I'm going to fling you in a brush-heap and burn you up," says he. 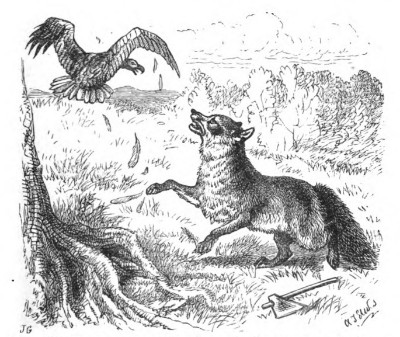 "Well, then, I'll settle your hash right now," says Brer Fox, says he, and with that he grab Mr. Buzzard by the tail, he did, and make for to dash him against the ground, but just about that time the tail feathers come out, and Mr. Buzzard sail off like one of these here balloons; and as he riz, he holler back, "You give me good start, Brer Fox," says he, and Brer Fox sat there and watch him fly out of sight. 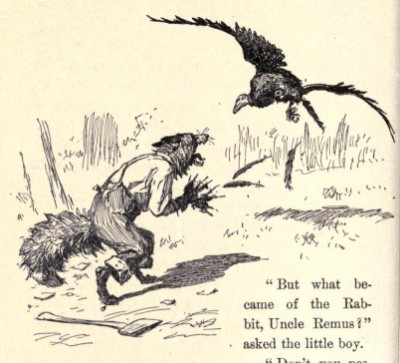 Next: Mr. Wolf Makes a Failure