Arabian Nights: The Story of the Fisherman

As this story begins, Scheherazade is the storyteller, and she begins by addressing her husband the sultan: Sire, there was once upon a time...

The fisherman then plays a wonderful trick on the genie, as you will see at the end of the story, which then transitions into the fisherman as storyteller, with the genie as his audience. 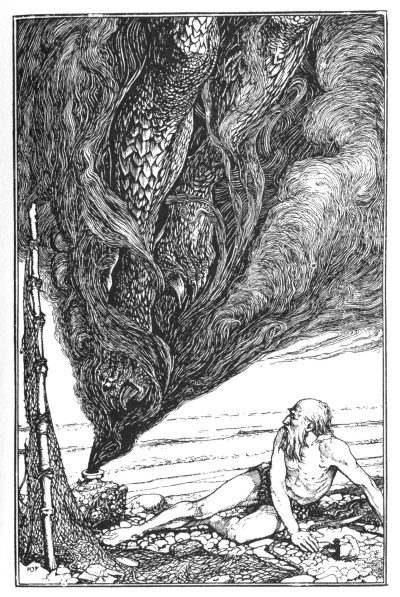 The Story of the Fisherman
[LIBRIVOX AUDIO]

Sire, there was once upon a time a fisherman so old and so poor that he could scarcely manage to support his wife and three children. He went every day to fish very early, and each day he made a rule not to throw his nets more than four times. He started out one morning by moonlight and came to the sea-shore. He undressed and threw his nets, and as he was drawing them towards the bank he felt a great weight. He though he had caught a large fish, and he felt very pleased. But a moment afterwards, seeing that instead of a fish he only had in his nets the carcase of an ass, he was much disappointed.

Vexed with having such a bad haul, when he had mended his nets, which the carcase of the ass had broken in several places, he threw them a second time. In drawing them in he again felt a great weight, so that he thought they were full of fish. But he only found a large basket full of rubbish. He was much annoyed.

"O Fortune," he cried, "do not trifle thus with me, a poor fisherman, who can hardly support his family!"

So saying, he threw away the rubbish, and after having washed his nets clean of the dirt, he threw them for the third time. But he only drew in stones, shells, and mud. He was almost in despair.

Then he threw his nets for the fourth time. When he thought he had a fish he drew them in with a great deal of trouble. There was no fish however, but he found a yellow pot, which by its weight seemed full of something, and he noticed that it was fastened and sealed with lead, with the impression of a seal. He was delighted. "I will sell it to the founder," he said; "with the money I shall get for it I shall buy a measure of wheat."

He examined the jar on all sides; he shook it to see if it would rattle. But he heard nothing, and so, judging from the impression of the seal and the lid, he thought there must be something precious inside. To find out, he took his knife, and with a little trouble he opened it. He turned it upside down, but nothing came out, which surprised him very much.

He set it in front of him, and whilst he was looking at it attentively, such a thick smoke came out that he had to step back a pace or two. This smoke rose up to the clouds, and stretching over the sea and the shore, formed a thick mist, which caused the fisherman much astonishment. When all the smoke was out of the jar it gathered itself together and became a thick mass in which appeared a genius, twice as large as the largest giant. When he saw such a terrible-looking monster, the fisherman would like to have run away, but he trembled so with fright that he could not move a step.

"Great king of the genii," cried the monster, "I will never again disobey you!"

At these words the fisherman took courage. "What is this you are saying, great genius? Tell me your history and how you came to be shut up in that vase."

At this, the genius looked at the fisherman haughtily. "Speak to me more civilly," he said, "before I kill you."

"Alas! why should you kill me?" cried the fisherman. "I have just freed you; have you already forgotten that?"

"No," answered the genius; "but that will not prevent me from killing you; and I am only going to grant you one favour, and that is to choose the manner of your death."

"But what have I done to you?" asked the fisherman.

"I cannot treat you in any other way," said the genius, "and if you would know why, listen to my story.

"I rebelled against the king of the genii. To punish me, he shut me up in this vase of copper, and he put on the leaden cover his seal, which is enchantment enough to prevent my coming out. Then he had the vase thrown into the sea. During the first period of my captivity I vowed that if anyone should free me before a hundred years were passed, I would make him rich even after his death. But that century passed, and no one freed me. In the second century I vowed that I would give all the treasures in the world to my deliverer; but he never came. In the third, I promised to make him a king, to be always near him, and to grant him three wishes every day; but that century passed away as the other two had done, and I remained in the same plight.

"At last I grew angry at being captive for so long, and I vowed that if anyone would release me I would kill him at once, and would only allow him to choose in what manner he should die. So you see, as you have freed me to-day, choose in what way you will die."

The fisherman was very unhappy. "What an unlucky man I am to have freed you! I implore you to spare my life."

"I have told you," said the genius, "that it is impossible. Choose quickly; you are wasting time."

The fisherman began to devise a plot. "Since I must die," he said, "before I choose the manner of my death, I conjure you on your honour to tell me if you really were in that vase?"

"Yes, I was" answered the genius.

"I really cannot believe it," said the fisherman. "That vase could not contain one of your feet even, and how could your whole body go in? I cannot believe it unless I see you do the thing."

Then the genius began to change himself into smoke, which, as before, spread over the sea and the shore, and which, then collecting itself together, began to go back into the vase slowly and evenly till there was nothing left outside. Then a voice came from the vase which said to the fisherman, "Well, unbelieving fisherman, here I am in the vase; do you believe me now?"

The fisherman instead of answering took the lid of lead and shut it down quickly on the vase. "Now, O genius," he cried, "ask pardon of me, and choose by what death you will die! But no, it will be better if I throw you into the sea whence I drew you out, and I will build a house on the shore to warn fishermen who come to cast their nets here, against fishing up such a wicked genius as you are, who vows to kill the man who frees you."

At these words the genius did all he could to get out, but he could not, because of the enchantment of the lid.

Then he tried to get out by cunning. "If you will take off the cover," he said, "I will repay you."

"No," answered the fisherman, "if I trust myself to you I am afraid you will treat me as a certain Greek king treated the physician Douban. Listen, and I will tell you The Story of the Greek King and the Physician Douban.


Next: The Greek King and the Physician Douban