Story of the Day: Why Possum's Tail is Bare

Here is today's story: Why Possum's Tail is Bare. This is a Cherokee story, and here are more Cherokee stories, plus more possum stories too. 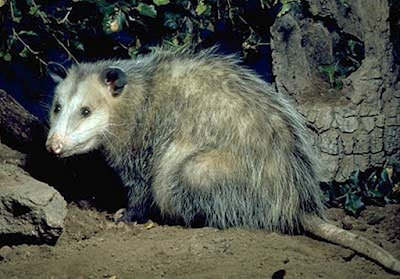 WHY THE POSSUM'S TAIL IS BARE

The Possum used to have a long, bushy tail, and was so proud of it that he combed it out every morning and sang about it at the dance, until the Rabbit, who had had no tail since the Bear pulled it out, became very jealous and made up his mind to play the Possum a trick.

There was to be a great council and a dance at which all the animals were to be present. It was the Rabbit's business to send out the news, so as he was passing the Possum's place he stopped to ask him if he intended to be there. The Possum said he would come if he could have a special seat, "because I have such a handsome tail that I ought to sit where everybody can see me."

The Rabbit promised to attend to it and to send someone besides to comb and dress the Possum's tail for the dance, so the Possum was very much pleased and agreed to come.

Then the Rabbit went over to the Cricket, who is such an expert hair cutter that the Indians call him the barber, and told him to go next morning and dress the Possum's tail for the dance that night. He told the Cricket just what to do and then went on about some other mischief.

In the morning the Cricket went to the Possum's house and said he had come to get him ready for the dance. So the Possum stretched himself out and shut his eyes while the Cricket combed out his tail and wrapped a red string around it to keep it smooth until night. But all this time, as he wound the string around, he was clipping off the hair close to the roots, and the Possum never knew it.

When it was night the Possum went to the townhouse where the dance was to be and found the best seat ready for him, just as the Rabbit had promised. When his turn came in the dance he loosened the string from his tail and stepped into the middle of the floor. The drummers began to drum and the Possum began to sing, "See my beautiful tail."

Everybody shouted and he danced around the circle and sang again, "See what a fine color it has."

They shouted again and he danced around another time, singing, "See how it sweeps the ground."

The animals shouted more loudly than ever, and the Possum was delighted. He danced around again and sang, "See how fine the fur is."

Then everybody laughed so long that the Possum wondered what they meant. He looked around the circle of animals and they were all laughing at him. Then he looked down at his beautiful tail and saw that there was not a hair left upon it, but that it was as bare as the tail of a lizard.

He was so much astonished and ashamed that he could not say a word, but rolled over helpless on the ground and grinned, as the Possum does to this day when taken by surprise.