Story of the Day: How the Tortoise Got Its Shell

Here is today's story: How the Tortoise Got Its Shell. This is a legend from Ghana in West Africa. Here are more stories from Ghana, and more African tortoise stories. 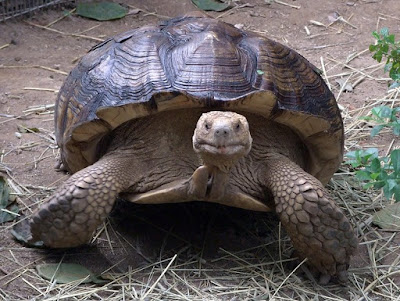 HOW THE TORTOISE GOT ITS SHELL

A few hundred years ago, the chief Mauri determined to have a splendid yam festival. He therefore sent his messengers to invite all his chiefs and people to the gathering, which was to take place on Fida.

On the morning of that day he sent some of his servants to the neighbouring towns and villages to buy goats, sheep, and cows for the great feast. Mr. Klo. the tortoise, who was a tall and handsome fellow was sent to buy palm wine. He was directed to the palm-fields of Koklovi, the chicken.

At that time Klo was a very powerful traveller and speedily reached his destination although it was many miles distant from Mauri's palace.

When he arrived Koklovi was taking his breakfast. When they had exchanged polite salutations Koklovi asked the reason of Klo's visit. He replied, "I was sent by His Majesty Mauri, the ruler of the world, to buy him palm wine."

"Whether he's ruler of the world or not," answered Koklovi, "no one can buy my wine with money. If you want it you must fight for it. If you win you can have it all and the palm-trees too."

This answer delighted Klo as he was a very strong fighter. Koklovi was the same, so that the fighting continued for several hours before Klo was able to overcome Koklovi. He was at last successful, however, and securely bound Koklovi before he left him.

Then, taking his great pot, he filled it with wine. Finding that there was more wine than the pot would hold, Klo foolishly drank all the rest. He then piled the palm-trees on his back and set out for the palace with the pot of wine. The amount which he had drunk, however, made him feel so sleepy and tired that he could not walk fast with his load. Added to this, a terrible rain began to fall, which made the ground very slippery and still more difficult to travel over.

By the time, Klo succeeded in reaching his master's palace the gates were shut and locked. Mauri, finding it so late, had concluded that every one was inside.

There were many people packed into the great hall, and all were singing and dancing. The noise of the concert was so great that no one heard Klo's knocking at the gate, and there he had to stay with his great load of wine and palm-trees.

The rain continued for nearly two months and was so terrible that the people all remained in the palace till it had finished. By that time Klo had died, under the weight of his load—which he had been unable to get off his back. There he lay, before the gate, with the pile of palm-trees on top of him.

When the rain ceased and the gates were opened the people were amazed to see this great mound in front of the gate, where before there had been nothing. They fetched spades and began to shovel it away.

When they came to the bottom of the pile there lay Klo. His earthenware pot and the dust had caked together and formed quite a hard cover on his back.

He was taken into the palace—and by the use of many wonderful medicines he was restored to life. But since that date he has never been able to stand upright. He has been a creeping creature, with a great shell on his back.