Story of the Day. Where Spanish Moss Comes From

Here is today's story: Where Spanish Moss Comes From. This story was collected by Emma Backus in North Carolina around the year 1910. You can read more about Spanish Moss at Wikipedia, and here are some more aetiological ("origin") stories from African American storytellers, plus more stories collected by the folklorist Emma Backus. 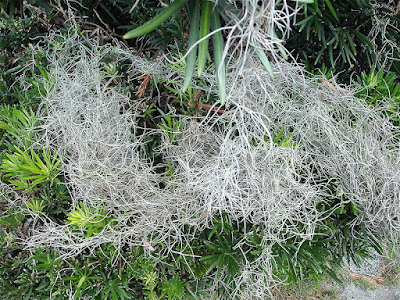 WHERE SPANISH MOSS COMES FROM

Long time ago there was a powerful wicked man. He was that sinful that Death he don't have the heart to cut him off in his sins, excepting he give him a warning.

Well, the years go by; and the wicked man he get a powerful old man — he deaf and blind, and he just drag hisself about.

And the wicked man he done perish away till he just a shadow with long hair. His hair it grow longer and longer, and it blow in the wind; and still he can't die, 'cause Death he done pass him by.

So he here to wander and blow about in the woods, and he perish away till all your can see is his powerful long hair blowing all about the trees; and his hair it done blow about the trees till it done grow fast, and now you all folks done calls it Spanish Moss.