Today's free audiobook is Maoriland Fairy Tales by Edith Howes. This book contains stories told by the Maori people of New Zealand (find out more at Wikipedia). You can see a complete list of the book's contents at the Freebookaplooza.

The story I have selected here is one about a battle between two magicians, one evil and one good. You can read another version of this same story here: The Magical Wooden Head (Kon Ga Puhi a Puarata Raua Ko Tautohito). 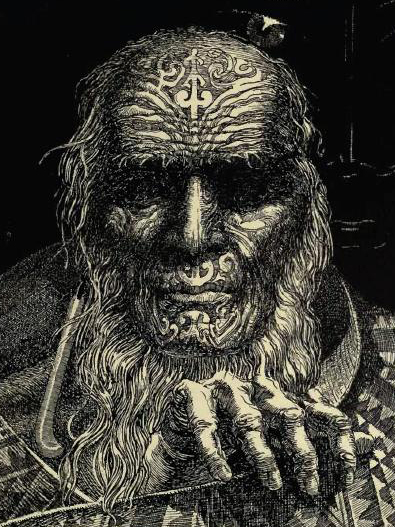 In his tower on a high hill Puarata the wicked magician kept a monstrous wooden head. The head was served by thousands of invisible genii, who sallied forth at its commands to work its evil will. Puarata's power grew. He had only to cry,"Strangers pass!" to draw a shout so loud and terrible from the wooden head that all travellers within sound of it dropped dead. The forest was strewn with the bones of those who had perished; the hill became a noted danger spot, a menace to the country. Far and wide Puarata was hated and his power dreaded.

Parties of brave warriors left their homes to creep up the hill and surprise the old magician, and so put an end to the terror. But the invisible genii in the forest saw them and warned their master. Then the great shout rang forth, and the warriors fell dead.

The people despaired. At last they begged help from Hakawau, a powerful sorcerer who used his art for good."Rid us of this terror," they urged.

Hakawau considered. "I will dream over it," he said. "Tomorrow I will tell you whether it will be well for me to go."

He called his genii round him, uttered spells, slept, and dreamed. In his dream he saw his genii driving Puarata's genii before them."It is well," he said when he awoke. "I shall destroy Puarata's power."

Taking with him a brave and trusted friend, he set off for Puarata's hill. The people in the villages they passed came out to bring them food and cheer them on their dangerous way.

Some said, "You go to death. Puarata is too strong. Stay here. Attempt not this rash deed." But the two would not be stayed.

At the edge of Puarata's country the heart of Hakawau's friend began to fail him, but Hakawau cheered him on.

Later they came upon a pile of human bones. "We are now within sound of the shout," he said. "Are we not courting death?"

Hakawau waved his hand. In a moment his friend saw what had before been hidden from him — thousands of good genii surrounding them. "Our guards," said Hakawau. His friend was from that moment fearless.

On a hill that faced Puarata's tower Hakawau called up his genii. Half he sent to show themselves before the tower; the remainder stayed invisibly by him.

As soon as the good genii showed themselves before the tower the evil genii rushed out at them. For a time Hakawau's genii fought; then, acting on instructions, they pretended fright, and fled downhill. Puarata's genii pursued them far across the valley, leaving the tower undefended.

As soon as they were gone Hakawau sent the waiting genii to capture the tower. They seized the tower, tied up the wicked Puarata, and beat him till his magic flew away.

As the evil genii returned one by one from their fruitless pursuit through the valley, they too were seized and beaten till their magic flew away.

"Let us go up to the tower," said Hakawau to his friend.

In the tower Puarata lay fast bound. He ground his teeth with rage at sight of his successful enemy. "Strangers come!" he called, invoking the aid of the wooden head to avenge his fall. No shout followed. A low, wailing cry was the only sound the wooden head had power to make.

"No,"said Hakawau. "I do not kill. Your evil deeds are for ever stopped."

He unbound Puarata, leaving him alive but powerless.

So there was peace in that country, and men journeyed unafraid.

Here is the audio for the whole book, and you can also go directly to the story of the rival magicians: The Wooden Head.

Contact me if you would like to do this book for extra credit reading, and I will divide it up into "chunks" of reading/listening that you can use for one, two, three, four, or five weeks of extra credit.