Today's free audiobook is Manx Fairy Tales by Sophia Morrison. This book contains stories from the Isle of Man, which is one of the Celtic cultural centers of the British Isles. You can see a complete list of the book's contents at the Freebookaplooza.

The story I've picked out to share is this one about Manx cats whose most famous feature is that they do not have tails. You can read more about Manx cats at Wikipedia. Here is the legend of how the Manx cats lost their tails:


HOW THE MANX CAT LOST HER TAIL 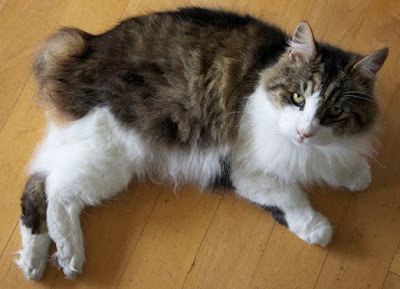 When Noah was calling the animals into the Ark, there was one cat who was out mousing and took no notice when he was calling to her. She was a good mouser, but this time she had trouble to find a mouse and she took a notion that she wouldn’t go into the Ark without one.

So at last, when Noah had all the animals safe inside, and he saw the rain beginning to fall, and no sign of her coming in, he said: ‘Who’s out is out, and who’s in is in!’

And with that he was just closing the door when the cat came running up, half drowned—that’s why cats hate the water—and just squeezed in, in time. But Noah had slammed the door as she ran in and it cut off her tail, so she got in without it, and that is why Manx cats have no tails to this day.

Bee bo bend it,
My tail’s ended,
And I’ll go to Mann
And get copper nails,
And mend it.

Here is the audio for the whole book, and you can also go directly to the story of the Manx cat: How the Manx Cat lost her Tail.

Contact me if you would like to do this book for extra credit reading, and I will divide it up into "chunks" of reading/listening that you can use for one, two, three, or four weeks of extra credit.
Posted by Laura Gibbs