Sun Wu Kung: The Queen-Mother of the West

In this episode, you will see how the monkey-king steals the peaches of the "Queen Mother of the West,' Xi Wangmu. You can read more about this goddess at Wikipedia, and there is even an article about her peaches of immortality.

[Notes by LKG]
This story is part of the The Monkey King unit. Story source: "The Ape Sun Wu Kung" in The Chinese Fairy Book, ed. by R. Wilhelm and translated by Frederick H. Martens (1921). 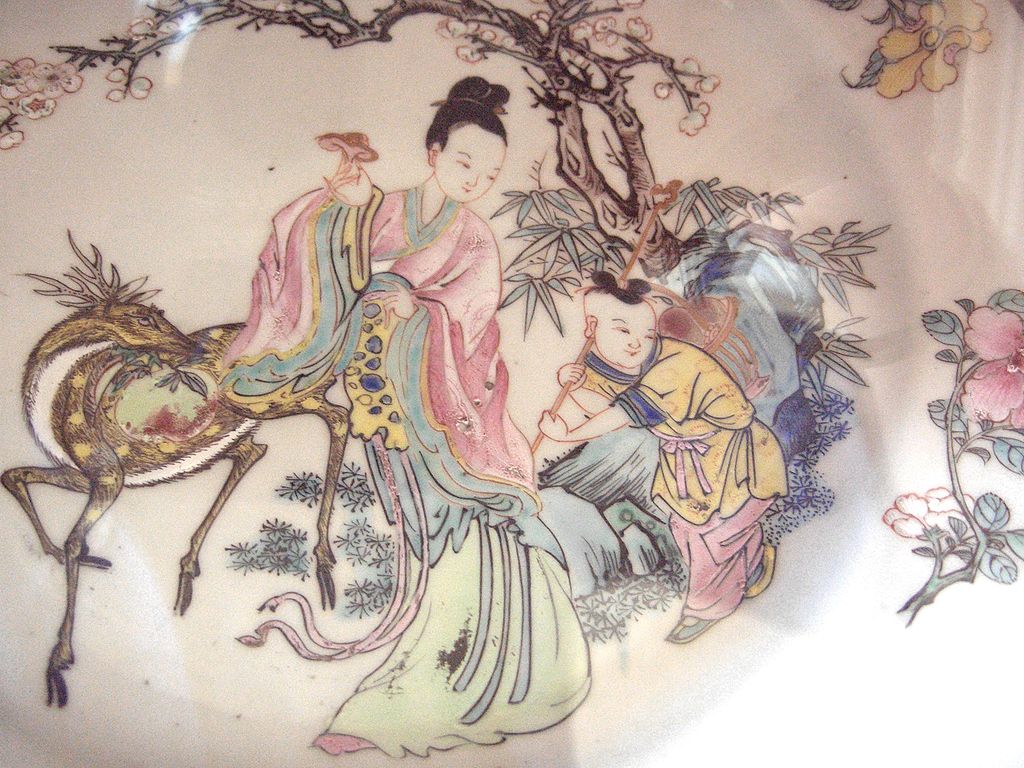 (The Queen-Mother of the West)

The Queen-Mother of the West

The Great Saint expressed his thanks, and the Lord of the Heavens ordered two skilled architects to build a castle for him East of the peach-garden of the Queen-Mother of the West. And he was led into it with all possible honors.

Now the Saint was in his element. He had all that heart could wish for and was untroubled by any work. He took his ease, walked about in the Heavens as he chose, and paid visits to the gods. The Three Pure Ones and the Four Rulers he treated with some little respect, but the planetary gods and the lords of the twenty-eight houses of the moon, and of the twelve zodiac signs, and the other stars he addressed familiarly with a “Hey, you!”

Thus he idled day by day, without occupation, among the clouds of the Heavens.

On one occasion, one of the wise said to the Lord of the Heavens: “The holy Sun is idle while day follows day. It is to be feared that some mischievous thoughts may occur to him, and it might be better to give him some charge.”

So the Lord of the Heavens summoned the Great Saint and said to him: “The life-giving peaches in the garden of the Queen-Mother will soon be ripe. I give you the charge of watching over them. Do your duty conscientiously!”

This pleased the Saint and he expressed his thanks. Then he went to the garden, where the caretakers and gardeners received him on their knees.

He asked them: “How many trees in all are there in the garden?”

The Saint heard all this with pleasure. He checked up the lists and from that time on appeared every day or so to see to things. The greater part of the peaches in the last row were already ripe. When he came to the garden, he would on each occasion send away the caretakers and gardeners under some pretext, leap up into the trees, and gorge himself to his heart’s content with the peaches.

At that time the Queen-Mother of the West was preparing the great peach banquet to which she was accustomed to invite all the gods of the Heavens. She sent out the fairies in their garments of seven colors with baskets that they might pick the peaches.

The caretaker said to them: “The garden has now been entrusted to the guardianship of the Great Saint Who is Heaven’s Equal, so you will first have to announce yourselves to him.”

With that he led the seven fairies into the garden. There they looked everywhere for the Great Saint, but could not find him. So the fairies said: “We have our orders and must not be late. We will begin picking the peaches in the meantime!”

So they picked several baskets full from the foremost row. In the second row the peaches were already scarcer. And in the last row there hung only a single half-ripe peach. They bent down the bough and picked it, and then allowed it to fly up again. 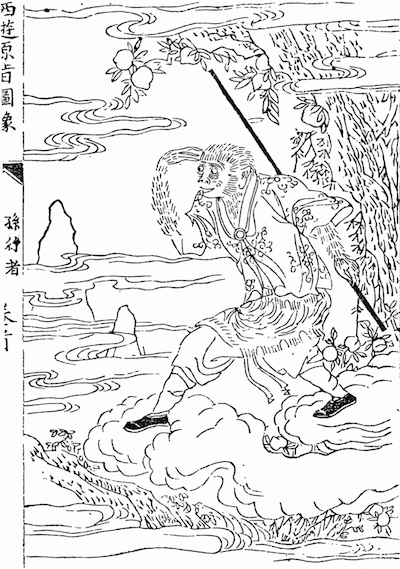