More Brer Rabbit: Why Mr. Possum Has No Hair on His Tail

The last story was about why rabbits all have short tails, and now you are going to learn why opossums have those strange tails with no hair on them.

Why Mr. Possum Has No Hair on His Tail
[LIBRIVOX AUDIO]

One time old Brer Possum, he get so hungry, he did, that he pleased for to have a mess of persimmons. He monstrous lazy man, old Brer Possum was, but by and by his stomach begun to growl and holler at him so that he just had to rack 'round and hunt up something; and whiles he was racking 'round, who should he run up with but Brer Rabbit, and they was hail-fellows, 'cause Brer Possum, he ain't been bothering Brer Rabbit like them other critters. 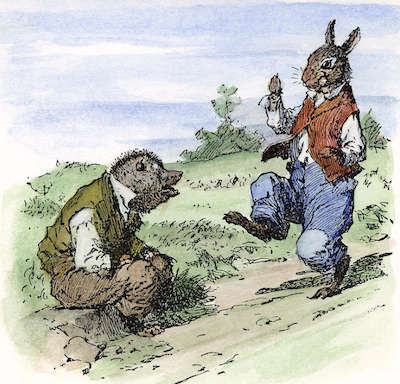 In them days Brer Bear was a bee-hunter. He make his living finding bee trees, and the way he find 'em he plant him some persimmon-trees, which the bees they'd come to suck the persimmons and then old Brer Bear he'd watch 'em where they'd go, and then he'd be mighty apt for to come up with 'em.

No matter about dat, the persimmon patch was there just like I tell you, and old Brer Possum mouth begun to water soon as he hear talk of 'em, and most before Brer Rabbit done telling him the news, Brer Possum, he put out, he did, and it weren't long before he was perch up in the highest tree in Brer Bear persimmon patch.

But Brer Rabbit, he done determined for to see some fun, and whiles all this was going on, he run 'round to Brer Bear house, and holler and tell him which they was somebody destroying on his persimmons, and Brer Bear, he hustle off for to catch him.

Last he hear Brer Bear coming sure enough, but it was the same old tune— "One persimmon more and then I'll go" — and just about that time Brer Bear busted into the patch, and give the tree a shake, and Brer Possum, he dropped out long of the other ripe persimmons, but time he touch the ground he got his foots together and he lit out for the fence same as a race-horse, and across that patch him and Brer Bear had it, and Brer Bear gaining every jump, till time Brer Possum make the fence Brer Bear grab him by the tail, and Brer Possum, he went out between the rails and give a powerful jerk and pull his tail out 'twixt Brer Bear tooths. 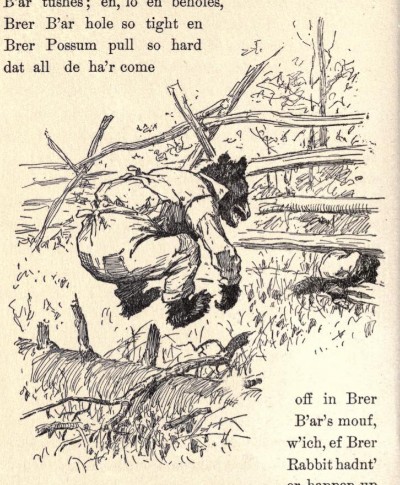 And, lo and beholds, Brer Bear hold so tight and Brer Possum pull so hard that all the hair come off in Brer Bear's mouth, which, if Brer Rabbit hadn't've happen up with a gourd of water, Brer Bear'd got strangled.

From that day to this, Brer Possum ain't had no hair on his tail, and neither do his chilluns. 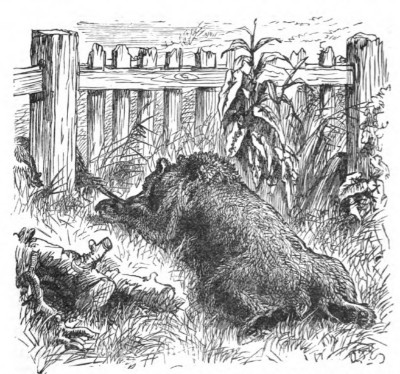 Next: The End of Mr. Bear