Harris uses the word "polecat" here to refer to the skunk; see the reference to polecats here in the Wikipedia article about skunks, along with the etymology of the word; it is an Algonquian word adopted into English.

Of all the critters, old Brer Bear had the biggest and the warmest house. I don't know why nor wherefore, but I'm a-telling you the plain fact, just as they told it unto me.

Well, old Brer Bear had the big house I'm a-telling you about. If he ever is brag of it, it ain't never come down to me. Yet that's just what he had — a big house and plenty of room for him and his family; and he ain't had more than he need, 'cause all of his family was fat and had what folks calls heft — the natural plumpness. 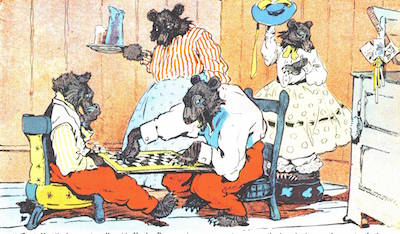 
He had a son name Simon, and a gal name Sue, not counting his old woman, and they all live with one another day after day, and night after night; and when one of 'em went abroad, they'd be expected home about meal-time, if not before, and they segashuated right along from day to day, washing their face and hands in the same wash-pan in the back porch, and wiping on the same towel same as all happy families always does. 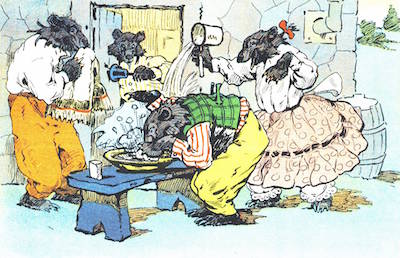 
Well, time went on and fetched the changes that might be expected, and one day there come a mighty knocking on Brer Bear's door.

Brer Bear, he holler out, he did. "Who that come a-knocking this time of the year, 'fore the corn's done planted, or the cotton-crop's pitched?"

The one at the door make a big noise, and rattle the hinges.

Brer Bear holler out, he did, "Don't tear down my house! Who is you, anyhow, and what you want?" 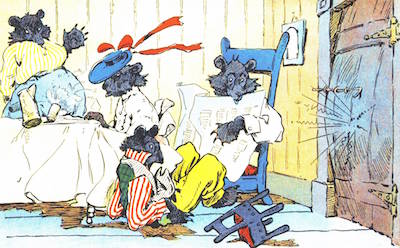 And the answer come, "I'm one and therefore not two; if you are more than one, who is you and what you doing in there?" 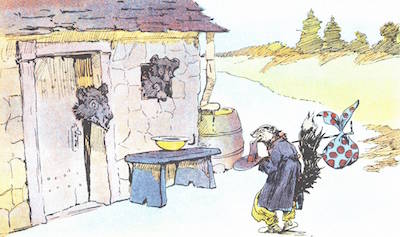 
Brer Bear, he say, says he, "I'm all of one and mighty nigh two, but I'd thank you for to tell me you full family name."

Then the answer come. "I'm the knocker and the mover both, and if I can't climb over I'll crawl under if you do but give me the word. Some calls me Brer Polecat, and some a big word that it ain't worth while to remember, but I want to move in. It's mighty cold out here, and all I meets tells me it's mighty warm in there where you is."

Then old Brer Bear say, says he, "It's warm enough for them what stays in here, but not nigh so warm for them on the outside. What does you really want?"

Brer Polecat respond, he did, "I wants a heap of things that I don't get. I'm a mighty good housekeeper, but I takes notice that there's mighty few folks that wants me to keep house for 'em."

Brer Bear say, says he, "I ain't got no room for no housekeeper; we ain't scarcely got room for to go to bed. If you can keep my house on the outside, you are mighty welcome."

Brer Polecat say, "You may think you ain't got no room, but I bet you got just as much room as anybody what I know. If you let me in there one time, I bound you I'll make all the room I want." 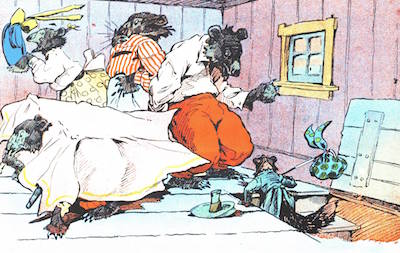 
Brer Polecat come in Brer Bear's house, and he had such a bad breath that they all had to get out — and he stayed and stayed till time stopped running against him. 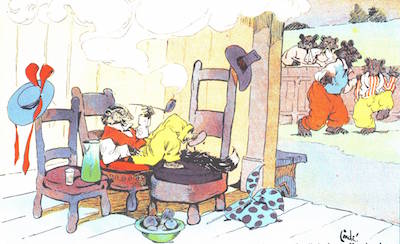 Next: Brer Rabbit Treats the Creeturs to a Race