The story of Motikatika was collected by Henri-Alexandre Junod in his work among the Ba-Ronga (Thonga, Tsonga) people of Mozambique in southern Africa. You can learn more at Wikipedia.

[Notes by LKG]
This story is part of the African Stories (Lang) unit. Story source: The Crimson Fairy Book by Andrew Lang and illustrated by H. J. Ford (1903).

Once upon a time, in a very hot country, a man lived with his wife in a little hut, which was surrounded by grass and flowers. They were perfectly happy together till, by-and-by, the woman fell ill and refused to take any food. The husband tried to persuade her to eat all sorts of delicious fruits that he had found in the forest, but she would have none of them, and grew so thin he feared she would die.

'Is there nothing you would like?' he said at last in despair.

'Yes, I think I could eat some wild honey,' answered she. The husband was overjoyed, for he thought this sounded easy enough to get, and he went off at once in search of it.

He came back with a wooden pan quite full, and gave it to his wife.

'I can't eat that,' she said, turning away in disgust. 'Look! there are some dead bees in it! I want honey that is quite pure.' And the man threw the rejected honey on the grass, and started off to get some fresh.

When he got back he offered it to his wife, who treated it as she had done the first bowlful.

'That honey has got ants in it: throw it away,' she said, and when he brought her some more, she declared it was full of earth.

In his fourth journey he managed to find some that she would eat, and then she begged him to get her some water. This took him some time, but at length he came to a lake whose waters were sweetened with sugar. He filled a pannikin quite full, and carried it home to his wife, who drank it eagerly, and said that she now felt quite well.

When she was up and had dressed herself, her husband lay down in her place, saying: 'You have given me a great deal of trouble, and now it is my turn!'

'What is the matter with you?' asked the wife.

'I am thirsty and want some water,' answered he; and she took a large pot and carried it to the nearest spring, which was a good way off.

'Here is the water,' she said to her husband, lifting the heavy pot from her head, but he turned away in disgust.

'You have drawn it from the pool that is full of frogs and willows; you must get me some more.' So the woman set out again and walked still further to another lake.

'This water tastes of rushes,' he exclaimed, 'go and get some fresh.'

But when she brought back a third supply he declared that it seemed made up of water-lilies, and that he must have water that was pure, and not spoilt by willows, or frogs, or rushes.

So for the fourth time she put her jug on her head, and passing all the lakes she had hitherto tried, she came to another, where the water was golden like honey. She stooped down to drink, when a horrible head bobbed up on the surface. 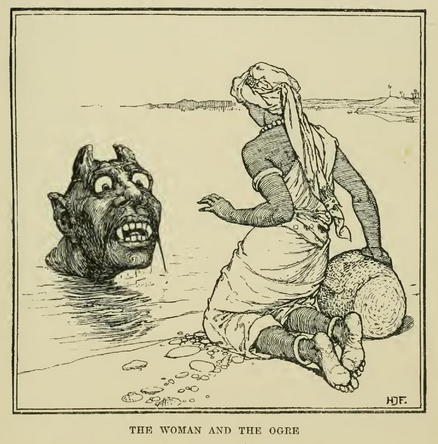 'How dare you steal my water?' cried the head.

'It is my husband who has sent me,' she replied, trembling all over. 'But do not kill me! You shall have my baby, if you will only let me go.'

'How am I to know which is your baby?' asked the Ogre.

'Oh, that is easily managed. I will shave both sides of his head and hang some white beads round his neck. And when you come to the hut you have only to call "Motikatika!" and he will run to meet you, and you can eat him.'

'Very well,' said the ogre, 'you can go home.' And after filling the pot she returned and told her husband of the dreadful danger she had been in.

Now, though his mother did not know it, the baby was a magician, and he had heard all that his mother had promised the ogre, and he laughed to himself as he planned how to outwit her.