Noah: The Tower of Babel

This story is part of the Noah unit. Story source: The Legends of the Jews by Louis Ginzberg (1909); for audio, see previous page. 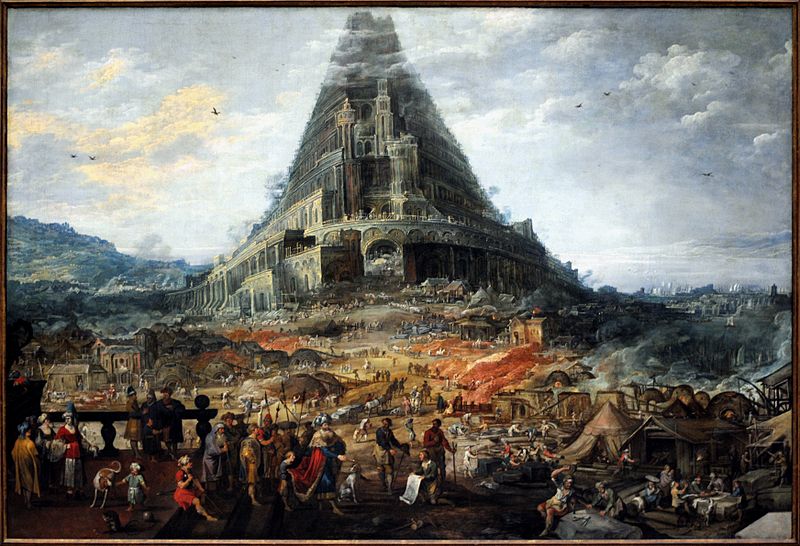 
The Tower of Babel

Many, many years were passed in building the tower. It reached so great a height that it took a year to mount to the top. A brick was, therefore, more precious in the sight of the builders than a human being. If a man fell down, and met his death, none took notice of it, but if a brick dropped, they wept, because it would take a year to replace it. So intent were they upon accomplishing their purpose that they would not permit a woman to interrupt herself in her work of brick-making when the hour of travail came upon her. Moulding bricks she gave birth to her child, and, tying it round her body in a sheet, she went on moulding bricks.

They never slackened in their work, and from their dizzy height they constantly shot arrows toward heaven, which, returning, were seen to be covered with blood. They were thus fortified in their delusion, and they cried, "We have slain all who are in heaven."

Thereupon God turned to the seventy angels who encompass His throne, and He spake: "Go to, let us go down, and there confound their language, that they may not understand one another's speech." Thus it happened.

Thenceforth none knew what the other spoke. One would ask for the mortar, and the other handed him a brick; in a rage, he would throw the brick at his partner and kill him. Many perished in this manner, and the rest were punished according to the nature of their rebellious conduct. Those who had spoken, "Let us ascend into the heavens, set up our idols, and pay worship unto them there," God transformed into apes and phantoms; those who had proposed to assault the heavens with their arms, God set against each other so that they fell in the combat; and those who had resolved to carry on a combat with God in heaven were scattered broadcast over the earth.

As for the unfinished tower, a part sank into the earth, and another part was consumed by fire; only one-third of it remained standing. The place of the tower has never lost its peculiar quality. Whoever passes it forgets all he knows.

Beside the chastisement of sin and sinners by the confounding of speech, another notable circumstance was connected with the descent of God upon earth--one of only ten such descents to occur between the creation of the world and the day of judgment. It was on this occasion that God and the seventy angels that surround His throne cast lots concerning the various nations. Each angel received a nation, and Israel fell to the lot of God. To every nation a peculiar language was assigned, Hebrew being reserved for Israel--the language made use of by God at the creation of the world.