Tejas Legends: How the North Wind Lost His Hair

This story provides an explanation for the origins of Spanish moss, a flowering plant that grows on trees such as live oaks and cypresses. You can find out more about Spanish moss at Wikipedia.

[Notes by LKG]
This story is part of the Tejas Legends unit. Story source: When the Storm God Rides: Tejas and Other Indian Legends retold by Florence Stratton and illustrated by Berniece Burrough (1936).


How the North Wind Lost His Hair

The howling old north wind is afraid to come to the country around the Gulf of Mexico. Only now and then does this cold fellow dare to come into the south, and when he does he does not stay long. He is afraid of the strong young south wind.

Once the two winds had a great fight. There are still signs of that fight in the southern woods. The Natchez and the Tejas Indians who lived along the Gulf had a story to tell about the north and the south winds and why the moss that grows in the trees is a sign of their fight.

The two winds hated each other. The north wind was a strong, fierce old man with long, thick, gray hair. When he came into the southern woods where the south wind lived, he would rush around blowing cold out of his mouth. His gray hair would fly behind him like a dark cloud. Nobody liked the old north wind. The Indians shivered in their tents and the flowers closed up and died when he came around. But everybody liked the warm young south wind, for he lived there. The flowers always opened up when he touched them with his soft hands and breathed upon their buds. The Indians would roam through the woods when he was with them.

One spring the old north wind came south and would not go away. He stayed for many weeks after the flowers should have been coming out and the birds should have been building their nests. It was so cold the leaves would not come out on the bare limbs of the trees. June came, but still the Gulf country looked as it looked during the winter months. The north wind kept blowing the south wind out over the Gulf, and because of this the spring weather would not come.

Finally the young south wind became tired of staying over the Gulf so long. He made up his mind to gather all his power and to enter into a great fight with the north wind that had driven him from his home. Filling his lungs with all the air he could hold, the south wind rushed across the water toward the land. He hit the north wind a mighty blow. When the two winds locked themselves in each other's arms and began howling in each other's faces the Indians ran into their tents, thinking the Storm God was riding over their heads on his thunder bird that breathed out the lightning. The fighting winds knocked around the clouds in the sky and tore them to pieces as they fought. They pulled up trees; they caused great waves to dash on the beach, they whirled birds around in the air, they tore up the snow that lay on the ground. They ran through the trees, they rolled on the earth and they clawed and shrieked.

At last the young south wind began to get the better of the old north wind. The old fellow was out of breath, and because he was out of breath he lost his power. Then the south wind wrapped his arms in the north wind's long gray hair and began whirling him round and round over his head. He whirled him faster and faster. A strange thing happened. Part of the north wind's gray hair broke loose, and he flew howling through the air.

There stood the young south wind with his strong arms full of hair. He was so happy that he began dancing around and swinging the north wind's hair over the trees. The birds sang and the Indians shouted, for they were glad the south wind had come home again. As the south wind danced and whirled around he let the hair loose, and it fell all over the trees, and where it fell it took root. There it grew and it still grows today. It is called Spanish moss. It hangs from the magnolia, oak, gum, and other trees in long, gray beards that sometimes dip in the streams.

The north wind does not stay in the south any more. When he sees the moss he remembers that fight with the south wind and he leaves as fast as he can.


Next: The Plant That Grows in Trees 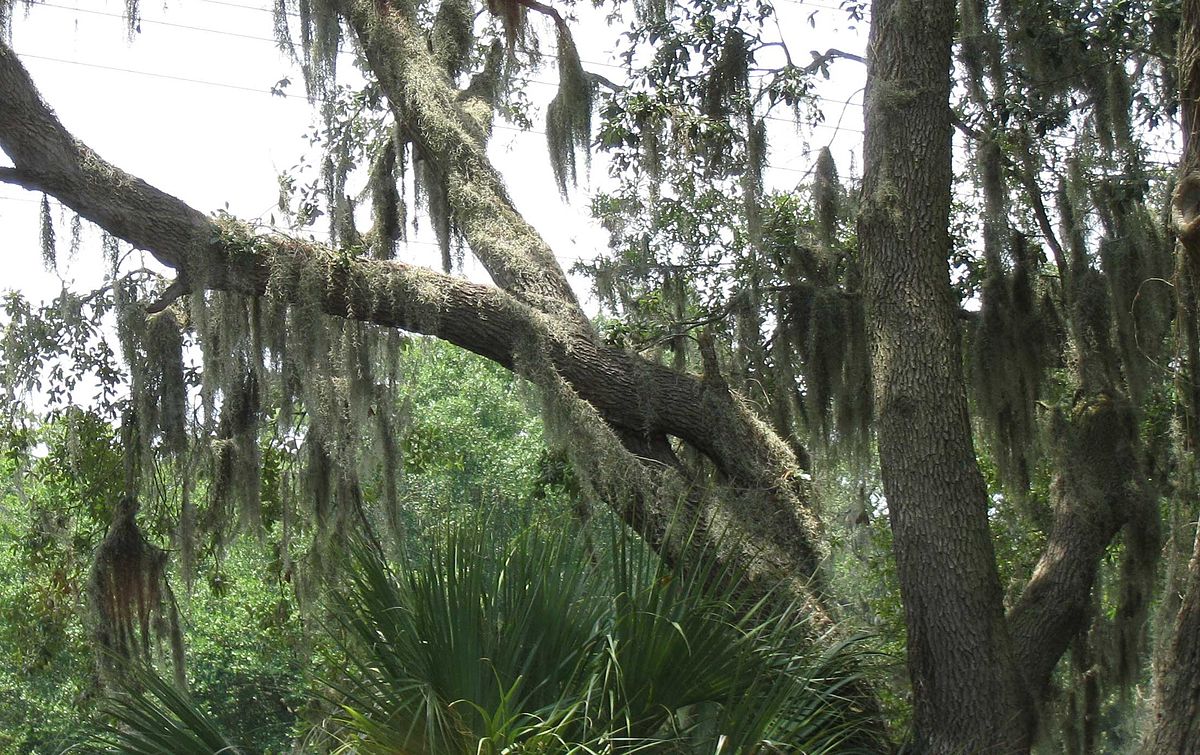