Aladdin's reversal of fortune will be triggered by the magician - remember the magician? - who realizes that Aladdin must be in the possession of the lamp that he had originally set out to obtain. He is still determined to get that lamp, so he journeys from Africa to China to carry out his wicked plot.

Aladdin and the Wonderful Lamp 4
[for audio, see previous page]

But far away in Africa the magician remembered Aladdin, and by his magic arts discovered that Aladdin, instead of perishing miserably in the cave, had escaped, and had married a princess, with whom he was living in great honour and wealth. He knew that the poor tailor's son could only have accomplished this by means of the lamp, and travelled night and day till he reached the capital of China, bent on Aladdin's ruin. As he passed through the town he heard people talking everywhere about a marvellous palace.

"Forgive my ignorance," he asked, "what is this palace you speak of?"

"Have you not heard of Prince Aladdin's palace," was the reply, "the greatest wonder of the world? I will direct you if you have a mind to see it."

The magician thanked him who spoke, and having seen the palace knew that it had been raised by the genie of the lamp, and became half mad with rage. He determined to get hold of the lamp, and again plunge Aladdin into the deepest poverty.

Unluckily, Aladdin had gone a-hunting for eight days, which gave the magician plenty of time. He bought a dozen copper lamps, put them into a basket, and went to the palace, crying: "New lamps for old!" followed by a jeering crowd.

The princess, sitting in the hall of four-and-twenty windows, sent a slave to find out what the noise was about, who came back laughing, so that the princess scolded her.

"Madam," replied the slave, "who can help laughing to see an old fool offering to exchange fine new lamps for old ones?"

Another slave, hearing this, said: "There is an old one on the cornice there which he can have." Now this was the magic lamp, which Aladdin had left there, as he could not take it out hunting with him. The princess, not knowing its value, laughingly bade the slave take it and make the exchange.

She went and said to the magician: "Give me a new lamp for this." 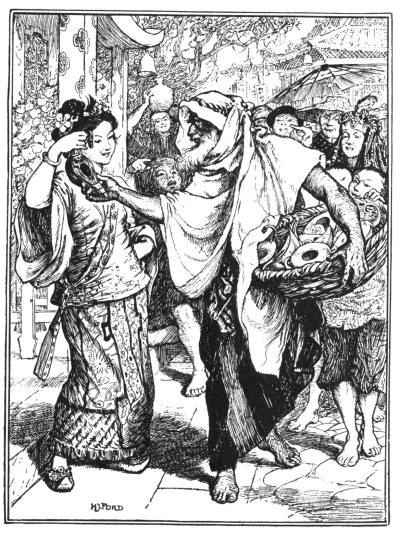 He snatched it and bade the slave take her choice, amid the jeers of the crowd. Little he cared, but left off crying his lamps, and went out of the city gates to a lonely place, where he remained till nightfall, when he pulled out the lamp and rubbed it. The genie appeared, and at the magician's command carried him, together with the palace and the princess in it, to a lonely place in Africa.

Next morning the Sultan looked out of the window towards Aladdin's palace and rubbed his eyes, for it was gone. He sent for the vizir, and asked what had become of the palace. The vizir looked out too, and was lost in astonishment. He again put it down to enchantment, and this time the Sultan believed him, and sent thirty men on horseback to fetch Aladdin in chains. They met him riding home, bound him, and forced him to go with them on foot. The people, however, who loved him, followed, armed, to see that he came to no harm.

He was carried before the Sultan, who ordered the executioner to cut off his head. The executioner made Aladdin kneel down, bandaged his eyes, and raised his scimitar to strike. At that instant the vizir, who saw that the crowd had forced their way into the courtyard and were scaling the walls to rescue Aladdin, called to the executioner to stay his hand. The people, indeed, looked so threatening that the Sultan gave way and ordered Aladdin to be unbound, and pardoned him in the sight of the crowd.

Aladdin now begged to know what he had done.

"False wretch!" said the Sultan, "come hither," and showed him from the window the place where his palace had stood. Aladdin was so amazed that he could not say a word.

"Where is my palace and my daughter?" demanded the Sultan. "For the first I am not so deeply concerned, but my daughter I must have, and you must find her or lose your head."

Aladdin begged for forty days in which to find her, promising if he failed to return and suffer death at the Sultan's pleasure. His prayer was granted, and he went forth sadly from the Sultan's presence. For three days he wandered about like a madman, asking everyone what had become of his palace, but they only laughed and pitied him. He came to the banks of a river, and knelt down to say his prayers before throwing himself in. In so doing he rubbed the magic ring he still wore.

The genie he had seen in the cave appeared, and asked his will. "Save my life, genie," said Aladdin, "and bring my palace back."

"Even so," said Aladdin "but thou canst take me to the palace, and set me down under my dear wife's window." He at once found himself in Africa, under the window of the princess, and fell asleep out of sheer weariness.

He was awakened by the singing of the birds, and his heart was lighter. He saw plainly that all his misfortunes were owing to the loss of the lamp, and vainly wondered who had robbed him of it.


Next: Aladdin and the Wonderful Lamp 5