You get three very different perspectives on the hare (rabbit) in these fables. In the story of the The Hares and the Frogs, the hares are terrified of everything around them, so much so that they want to die. Then in the famous fable of The Hare and the Tortoise, you get a boastful hare, one who is not afraid at all but is instead the victim of his own self-confidence. Finally, you get a hare in the final story who mistakenly puts her faith in her friends, but she learns her lesson before it is too late!

The fable of The Tortoise and the Hare is probably one of the most famous of all the fables, teaching a positive message about "slow and steady wins the race," or some similar moral. Yet in the versions of this story found in many other cultures, the tortoise (or some other slow animal) wins by trickery rather than by persistence; you can see many examples at Dan Ashliman's website: Races Between Unequal Contestants.

Note the use of "puss" to refer to the rabbit in the limerick of The Tortoise and the Hare; the word "puss" is usually used for cats, but it can be used for rabbits and hares as well; see Wikipedia for more information.

Note that here the two-fable illustration contains fables that are both found on this page.


Jacobs 15. The Hares and the Frogs (Perry 138)
The Hares were so persecuted by the other beasts, they did not know where to go. As soon as they saw a single animal approach them, off they used to run.

One day they saw a troop of wild Horses stampeding about, and in quite a panic all the Hares scuttled off to a lake hard by, determined to drown themselves rather than live in such a continual state of fear.

But just as they got near the bank of the lake, a troop of Frogs, frightened in their turn by the approach of the Hares scuttled off, and jumped into the water.

"Truly," said one of the Hares, "things are not so bad as they seem: There is always someone worse off than yourself."

Timid Hares, from the trumpeting wind,
Fled as swift as the fear in their mind;
Till in fright from their fear,
From the green sedges near,
Leaping Frogs left their terror behind.

OUR OWN ARE NOT THE ONLY TROUBLES

The Hare was once boasting of his speed before the other animals. "I have never yet been beaten," said he, "when I put forth my full speed. I challenge any one here to race with me."

The Tortoise said quietly, "I accept your challenge."

"That is a good joke," said the Hare; "I could dance round you all the way."

"Keep your boasting till you've beaten," answered the Tortoise. "Shall we race?"

So a course was fixed and a start was made. The Hare darted almost out of sight at once, but soon stopped and, to show his contempt for the Tortoise, lay down to have a nap.

The Tortoise plodded on and plodded on, and when the Hare awoke from his nap, he saw the Tortoise just near the winning-post and could not run up in time to save the race.

Then said the Tortoise: "Plodding wins the race."

'Twas a race between Tortoise and Hare,
Puss was sure she's so much time to spare,
That she lay down to sleep,
And let old Thick-shell creep
To the winning post first! You may stare. 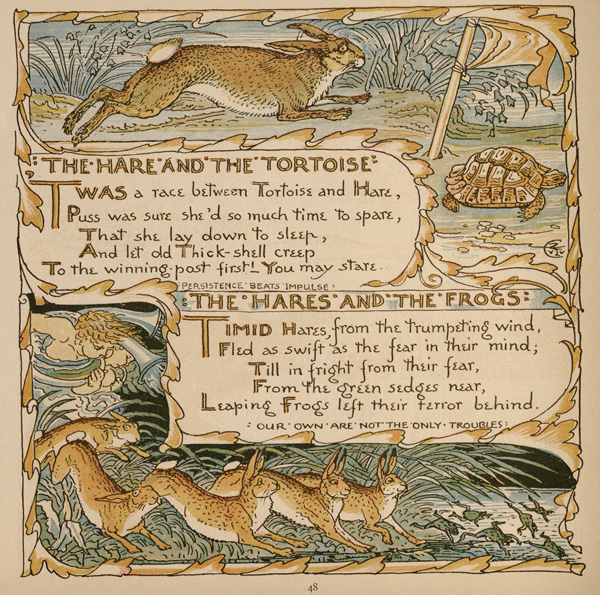 Jacobs 70. The Hare With Many Friends (Perry)

A Hare was very popular with the other beasts who all claimed to be her friends. But one day she heard the hounds approaching and hoped to escape them by the aid of her many friends.

So, she went to the horse, and asked him to carry her away from the hounds on his back. But he declined, stating that he had important work to do for his master. He felt sure, he said, that all her other friends would come to her assistance.

She then applied to the bull, and hoped that he would repel the hounds with his horns. The bull replied: "I am very sorry, but I have an appointment with a lady; but I feel sure that our friend the goat will do what you want."

The goat, however, feared that his back might do her some harm if he took her upon it. The ram, he felt sure, was the proper friend to apply to.

So she went to the ram and told him the case. The ram replied: "Another time, my dear friend. I do not like to interfere on the present occasion, as hounds have been known to eat sheep as well as hares."

The Hare then applied, as a last hope, to the calf, who regretted that he was unable to help her, as he did not like to take the responsibility upon himself, as so many older persons than himself had declined the task.

By this time the hounds were quite near, and the Hare took to her heels and luckily escaped.

He that has many friends, has no friends.