And the king and queen entered Heorot speedily and hastened to Beowulf. They grasped his two hands in theirs, and Hrothgar spoke in a loud voice, praising him: "Beowulf, son of strong Ecgtheow, hall! This is truly an end to Grendel. Thrice blessed are you, my son, and upon you may all the rewards of the gods be showered. You have delivered Daneland from a curse that has been the undoing of our people and of our power during twelve long years. Again and yet again, hall to you, Beowulf, great hero of Geatsland!"

Then the lady Wealhtheow the Beautiful praised him also, and hung upon his arm, and called her servants to prepare a great feast for all the people. And the feasting and drinking lasted all that day and well into the night. 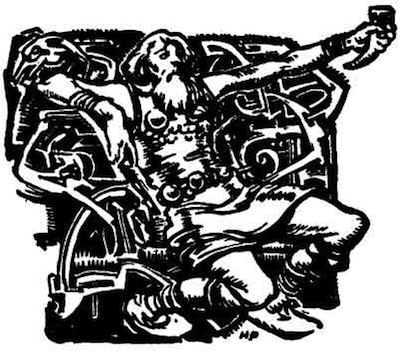 BUT the day following, there suddenly arrived before Hrothgar a messenger, his face all twisted with fear and his legs so shaking beneath him that they could scarce support his frame. And so distraught was this wild-eyed man that Hrothgar and Wealhtheow and Beowulf and all those who were then in Heorot clustered about him.

"Speak!" cried the queen, whose face was pale. "What new horror have you come to relate? For you have fear written black in your eyes. Speak!"

Turning to Hrothgar, the messenger fell upon his knees and lifted a stricken face to his master: "My lord, I bring terrible news to you. I have just come from the great hall, where I have beheld a most grievous sight. My lord Aescher, the Good and Wise, lies dead upon the threshold of Heorot, most foully murdered by some new fiend, his head severed from his body, his limbs crushed to nought. Haste you, my lord, for this is the greatest of all disasters."

Forthwith Hrothgar and his queen hastened to Heorot and there too came Beowulf and his earls, not knowing of the new misfortune. And once again they found the vast hall a scene of death and destruction. Grendel's arm was missing from the roof-tree, and the body of Aescher lay mangled before their horrified gaze.

Then Hrothgar turned away and folding his mantle about his head, wept silently, for Aescher was the most cherished of all his earls, the wisest of counselors, the dearest of friends.

Wealhtheow turned to the wide-eyed Beowulf. "This," cried she, "is the work of dead Grendel's monster-mother, avenging her monster-son. O Beowulf, your work is not yet done. We had forgot this other curse in our too-soon happiness. Will you seek out this fiend and slay her as you have slain her dreaded offspring? Already you have rid us of Grendel, and now we look to you to save us from his mother's vengeance. I fear unending desolation for all of us unless she, too, is destroyed."

At these words Beowulf cast his scarlet cloak from his broad shoulders and seized his sword. He called to his valiant earls: "Come, men! Let us seek this new monster before the world darkens again into night."

Then to the shaken king he said, "O Hrothgar, I pray that you will let horses be brought to carry us, for we must hasten to track the foul thing to her lair ere the scent is cold on the ground."

At this, Black Unferth, son of Ecglaf, stepped forth from among the crowding earls, and in his hands was the mighty shaft of his black sword, called Hrunting.

"Beowulf, son of Ecgtheow," he cried, "you came amongst us a stranger, and I am filled with shame in that I doubted you. Take my good sword Hrunting, my magic sword, for it will aid you in this new adventure that comes to try your strength, a strength that comes, surely, from the gods themselves. Let us bury our past differences and be friends, and I will follow you to the very edge of the world."

Then Beowulf embraced Unferth like a brother, and, holding aloft the dark Hrunting, and with Hrothgar upon one hand and Wealhtheow upon the other hand, he passed out through the great door of Heorot. Down the flight of long shallow steps they walked, and mounted at once the fine swift horses that awaited them below in the streaming sunshine.