SWIFTLY, swiftly they rode, Beowulf upon a great white charger, and the king beside him on a horse as black as midnight. Their trappings and harness glinted with gold and silver and precious jewels, and behind them rode the Danish lords and the earls of Geatsland, their armor gleaming in the sun as they rode after their leaders. 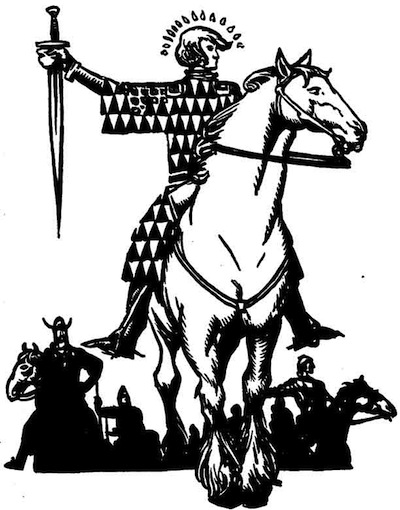 Huge dogs flung their enormous bodies along the way, having quickly picked up the powerful scent of Grendel and his monster-mother.

On and on they rode, but the sun at last was clouded over, and the heavens lowered upon them, while distant thunder sounded and forked lightning streaked blue the inclosing gloom.

All day they rode, nor did they once pause to refresh their horses or themselves.

On and on, over moor and fenland, through wide valleys they rode, until finally they came to a mere, deep hidden in an encircling wood of tangled burnt-out trees. The lake was small, but strange and evil vapors rose from its surface, and the water moved as though things of monstrous shape and size swam just below the water, waiting for whatever prey might fall to them.

Above the mere two great vultures with blood-red wings hovered in the foul-rising vapors, crying hungrily to each other, circling and circling.

The tracks of the monsters stopped short at the water's edge, and the great dogs ran round and round the mere, but there was no further scent, and, sitting down upon their haunches, the hounds mournfully gave tongue.

The darkness thickened, and, while the lords and their retainers lined the shores of the lake looking for they knew not what, Beowulf threw off his scarlet cloak and was buckling the black sword Hrunting to his belt.

"I go into the mere," he cried, "after this monster-woman."

A murmur of horror went up from those assembled on the strand.

"Yes, but I go alone," he warned, as several stepped to his side, casting off their cloaks. "I go alone. Wait here upon the shore for me. I will return, but when, I know not."

Then he fell on one knee before Hrothgar in homage and embraced each of his followers. They crowded round him, protesting at his folly, but Beowulf was firm in his resolve and bade them wait upon his returning.

Fully armed, he ran swiftly into the lake, a shout on his lips, his fair hair streaming like light, and the leaden waters closed thickly over him, and the lake shuddered on all its surface, and Beowulf disappeared from sight. 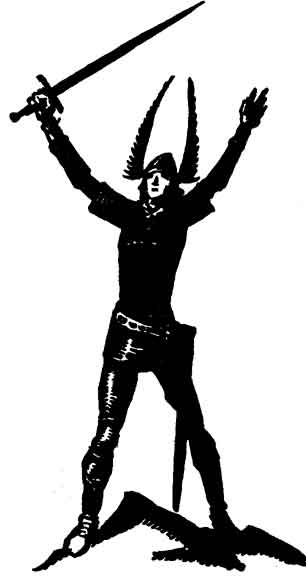 DOWN, down, down he sank. At first, he could see nothing, and the dark water sang in his ears and lay about his body like a thick mantle. He felt things brushing against his legs and body, soft things that slipped and glided. At these he swung the sword Hrunting, but so noiseless and slimy were the invisible creatures at which he slashed that he could not tell whether his blows found their mark or not.

But, gradually, as he sank, the darkness lessened, and he looked about him with wonder.

The water was now luminous, as if lighted by unseen fires of phosphorus and sulphur. Immense sea-animals and fish swayed past him in the mysterious light, and each, as he passed, threw at him an evil glance from its glowing eyes of red or green or sapphire blue. Their scales glinted like beaten gold, and his sword glanced from their sides as from fine armor.

Below him he saw fantastic forests of living coral, and many-colored sea-flowers, but (this was a strange thing) he never seemed to reach those deep sea-forests, for ever as he sank, the tops receded from him.

He was attacked by huge swarms of poisonous jelly-fish which sparkled in their strange whirlings. These he cut through valiantly and tore their clinging masses from his limbs.

Once, a hundred-armed monster caught him from behind, and he thought that he was lost. The snake-like tendrils coiled and twisted about his body, but he turned in a flash and sank Hrunting into the vile body until the long arms were loosened, and the water was stained black from its blood.

Down, down, down he sank through that shimmering and silent world, till he began to wonder when he would come upon what he sought so eagerly.