Beowulf: The Battle with Grendel


The Battle with Grendel

SILENTLY they fought in the fog-strewn hall of Heorot. Silently their bodies twisted and bent, this way and that, and Beowulf kept Grendel's huge hands with their long claws of sharp bone from him, and Grendel in turn sought to tear apart the quick body that slipped so easily through his arms and legs.

All about them lay the sleeping earls, and not one moved in the deep magic of his slumber as the two fought that silent fight.

Their bodies wove in and out among the sleepers, and Beowulf felt the hot reek of Grendel's breath upon his cheek, and the sweat stood out on Beowulf's broad brow and ran down into his eyes and blinded him. And Grendel's huge hands sought over and over again to clasp his opponent's head, to crush it in their iron grip.

Then the fight became a deadly struggle in one far corner of the hall, and neither one gained any advantage over the other. Then Beowulf slipped. On the earthen floor of Heorot they fell together, and the force of their fall made the earth tremble, as when two giants fight in mortal combat. But Grendel's hold lessened, and fear smote the heart of the fiend. He strove only to free himself from Beowulf's grasp and flee into the night, away from this white youth whose strength was the strength of thirty men. 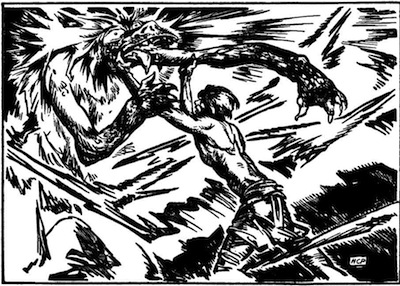 And now Beowulf had the upper hand and flew at the giant's throat. But here his hands clutched at thick scales upon which he could get no grip. Grendel nearly took the advantage, but before he could seize Beowulf, the lord of Geatsland had fastened both mighty hands upon the monster's arm and, with a sudden twist that forced a groan of agony from Grendel's lips, leaped behind him, forcing the imprisoned arm high up Grendel's back, and the beast fell prone on the floor.

Now came the final struggle, and sweat poured from Beowulf, while from Grendel there oozed a slimy sap that smelled like vinegar and sickened Beowulf. But he clung to the monster's arm, and slowly, slowly, he felt its great muscles and sinews give way, and as his foot found Grendel's neck, he prayed to all the gods for help and called upon his father Ecgtheow for strength to sustain him in this desperate effort.

And the mighty arm of Grendel gave way in the terrible hands of Beowulf, and, with a piercing shriek that shook the gilded rafters of Heorot, Grendel stumbled forward, leaving in Beowulf's hands the gory arm.

At that very moment, the spell that lay upon the sleeping warriors of Geatsland was broken, and the thirteen remaining earls struggled, as Beowulf had lately struggled, with the nightmare that was in their eyes, and swam out of sleep into waking.

Beowulf fell back upon the dais, the bleeding arm of Grendel in his hands. And Grendel, with a prolonged and ghastly wail, his blunt fangs gnashing together in dumb fury, stumbled toward the door, and, before Beowulf could recover, the fiend was away into the fog which swallowed him as surely and completely as though he had plunged into the everlasting sea.

And Beowulf, his magic-dazed companions crowding and babbling behind him in the doorway of Heorot, looked out into the fog-wet night, and the only sound that came to their dulled ears was the steady drip, drip, drip of the mist from the black trees.

WHEN dawn crept clear and untroubled across the woodland and touched the gold-bright hall of Heorot, there came from all quarters the subjects and servants of Hrothgar the king. In twos and threes they came at first, then in a great crowd, for the sleep of the world had been troubled the previous night, and now, half eager, half in consuming fear, the lords and peasantry of Daneland hurried to great Heorot.

At the wide doorway they rushed, and then, in amaze and wonder, they stopped: for within the hall there was a sight which for a moment made them afraid to enter, and those in front were held spellbound by what they saw, and those behind pushed eagerly forward in order to see.

For high toward the roof-tree of Heorot the brawny men of Geatsland were hoisting the mangled arm and torn shoulder of Grendel, and the people marveled at the sight of this arm, the largest and most terrible arm in all the world, the torn sinews hanging dead, the red ooze of the beast's blood clotted and caked on the cruel curved fingers with their hooked talons of bone.

Upon the dais of the king stood Beowulf, wrapped close in his scarlet mantle, his yellow hair about his head like a golden cloud, and his sea-blue eyes flashing with the pride of a conqueror.

Then the crowding people flocked into the hall, and a shout went up from a hundred throats as the arm swung high from the roof. And men hastened away to the bower of Hrothgar, and summoned the king and his lady Wealhtheow to view this token of the stricken Grendel.

Next: A New Misfortune