Sioux: The Rabbit and the Bear 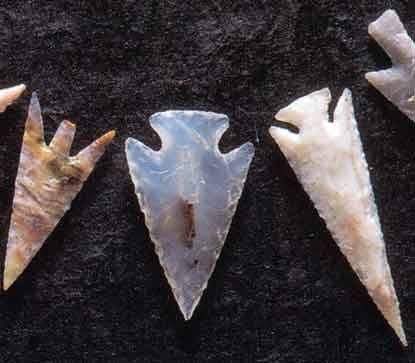 [Notes by LKG]
This story is part of the Sioux unit. Story source: Myths and Legends of the Sioux by Marie McLaughlin (1916). 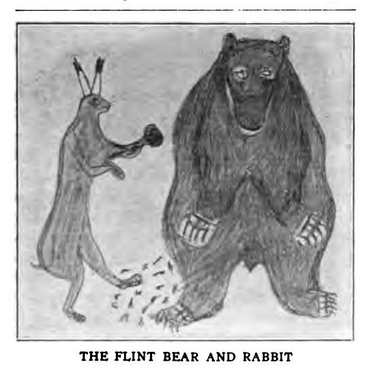 
The Rabbit and the Bear with the Flint Body

The Rabbit and his grandmother were in dire straits, because the rabbit was out of arrows. The fall hunt would soon be on and his quiver was all but empty. Arrow sticks he could cut in plenty, but he had nothing with which to make arrowheads.

"You must make some flint arrowheads," said his grandmother. "Then you will be able to kill game."

"Where shall I get the flint?" asked the rabbit.

"From the old bear chief," said his old grandmother. For at that time all the flint in the world was in the bear's body.

So the rabbit set out for the village of the Bears. It was winter time and the lodges of the bears were set under the shelter of a hill where the cold wind would not blow on them and where they had shelter among the trees and bushes.

He came at one end of the village to a hut where lived an old woman. He pushed open the door and entered. Everybody who came for flint always stopped there because it was the first lodge on the edge of the village. Strangers were therefore not unusual in the old woman's hut, and she welcomed the rabbit. She gave him a seat and at night he lay with his feet to the fire.

The next morning the rabbit went to the lodge of the bear chief. They sat together awhile and smoked.

At last the bear chief spoke. "What do you want, my grandson?"

"I have come for some flint to make arrows," answered the rabbit.

The bear chief grunted, and laid aside his pipe. Leaning back he pulled off his robe and, sure enough, one half of his body was flesh and the other half hard flint.

"Bring a stone hammer and give it to our guest," he bade his wife. Then as the rabbit took the hammer he said: "Do not strike too hard."

"Grandfather, I shall be careful," said the rabbit. With a stroke he struck off a little flake of flint from the bear's body.

The rabbit struck a little harder.

The bear grew impatient. "No, no, strike off bigger pieces. I can't be here all day. Tanka kaksa wo! Break off a big piece."

The rabbit struck again -- hard! "Ni-sko -- cha?" he cried, as the hammer fell. But even as he spoke the bear's body broke in two, the flesh part fell away and only the flint part remained. Like a flash the rabbit darted out of the hut.

There was a great outcry in the village. Open-mouthed, all the bears gave chase. But as he ran the rabbit cried: "Wa-hin-han-yo (snow, snow); Ota-po, Ota-po -- lots more, lots more," and a great storm of snow swept down from the sky.

The rabbit, light of foot, bounded over the top of the snow. The bears sunk in and floundered about helpless. Seeing this, the rabbit turned back and killed them one by one with his club. That is why we now have so few bears.


Next: The Story of the Lost Wife