Overview. Although Egypt is located in Africa, it becomes such an influential center of Arabic culture later on that I decided to include Ancient Egypt here in the Middle Eastern module. This selection of stories from Mackenzie's Egyptian Myth and Legend includes both mythology and folklore. You will read the story of the world's creation, along with the adventures of the gods and goddesses such as Ra, the sun-god; Hathor, the cow-goddess; and Thoth, the god of magic and the inventor of writing. The unit also includes the famous cycle of tales about the divine family of Osiris, Isis and Horus that explains how Osiris himself died and then became the ruler of the realm of the dead. The folktales, meanwhile, focus on stories of magic and the supernatural, including the story of the deadly rivalry between the two brothers, Anpu and Bata, and how they were finally reconciled.

Language. This book consists of retellings of Egyptian legends, not direct translations of the ancient Egyptian texts, so the language used should not cause any difficulties.

Navigation. You will find the table of contents below, and you can also use this link to see the story posts displayed on two pages total: Ancient Egyptian Myths. Click "Older Posts" at the bottom of that page to see the second page. 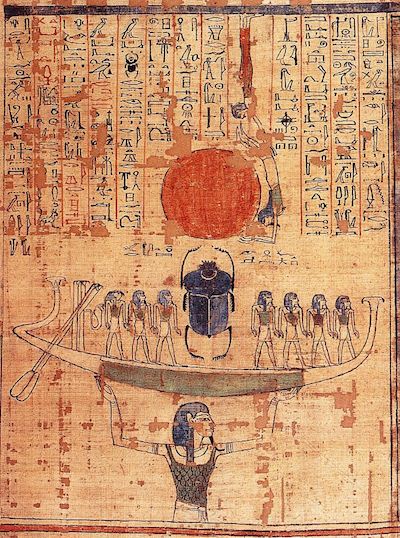 (Barque of the Sun-God, Ra)