West Africa: Ants and Their Bundles

In this story you will see a reference to the nuts of the kola tree. The kola tree is native to Africa, and the nuts contain caffeine. And yes, this is where the name "cola" comes from, as kola nuts can be used to create caffeinated beverages, although kola nuts are not used in the manufacturing of Coca-Cola today. You can read more about kola nuts at Wikipedia. 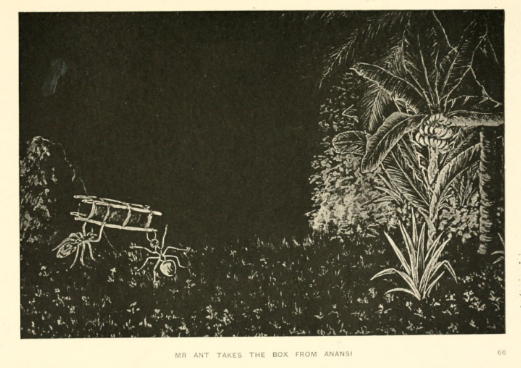 KWEKU ANANSI and Kweku Tsin—his son—were both very clever farmers. Generally they succeeded in getting fine harvests from each of their farms. One year, however, they were very unfortunate. They had sown their seeds as usual, but no rain had fallen for more than a month after and it looked as if the seeds would be unable to sprout.

Kweku Tsin was walking sadly through his fields one day looking at the bare, dry ground, and wondering what he and his family would do for food, if they were unable to get any harvest. To his surprise he saw a tiny dwarf seated by the roadside. The little hunchback asked the reason for his sadness, and Kweku Tsin told him. The dwarf promised to help him by bringing rain on the farm. He bade Kweku fetch two small sticks and tap him lightly on the hump, while he sang: "O water, go up! O water, go up, And let rain fall, and let rain fall!"

To Kweku's great joy rain immediately began to fall, and continued till the ground was thoroughly well soaked. In the days following the seeds germinated, and the crops began to promise well.

Anansi soon heard how well Kweku's crops were growing—whilst his own were still bare and hard. He went straightway to his son and demanded to know the reason. Kweku Tsin, being an honest fellow, at once told him what had happened.

Anansi quickly made up his mind to get his farm watered in the same way, and accordingly set out toward it. As he went, he cut two big, strong sticks, thinking, "My son made the dwarf work with little sticks. I will make him do twice as much with my big ones." He carefully hid, the big sticks, however, when he saw the dwarf coming toward him.

As before, the hunchback asked what the trouble was, and Anansi told him. "Take two small sticks, and beat me lightly on the hump," said the dwarf. "I will get rain for you."

But Anansi took his big sticks and beat so hard that the dwarf fell down dead. The greedy fellow was now thoroughly frightened, for he knew that the dwarf was jester to the King of the country, and a very great favourite of his. He wondered how he could fix the blame on some one else.

He picked up the dwarf's dead body and carried it to a kola-tree. There he laid it on one of the top branches and sat down under the tree to watch.

By and by Kweku Tsin came along to see if his father had succeeded in getting rain for his crops. "Did you not see the dwarf, father?" he asked, as he saw the old man sitting alone.

"Oh, yes!" replied Anansi; "but he has climbed this tree to pick kola. I am now waiting for him."

"I will go up and fetch him," said the young man—and immediately began to climb. As soon as his head touched the body the latter, of course, fell to the ground.

"Oh! what have you done, you wicked fellow?" cried his father. "You have killed the King's jester!"

"That is all right," quietly replied the son (who saw that this was one of Anansi's tricks). "The King is very angry with him, and has promised a bag of money to any one who would kill him. I will now go and get the reward."

"No! No! No!" shouted Anansi. "The reward is mine. I killed him with two big sticks. I will take him to the King."

Off set Anansi, quite pleased with the prospect of getting a reward. He reached the King's court, only to find the King very angry at the death of his favourite. The body of the jester was shut up in a great box and Anansi was condemned—as a punishment—to carry it on his head for ever. The King enchanted the box so that it could never be set down on the ground. The only way in which Anansi could ever get rid of it was by getting some other man to put it on his head. This, of course, no one was willing to do.

At last, one day, when Anansi was almost worn out with his heavy burden, he met the Ant. "Will you hold this box for me while I go to market and buy some things I need badly?" said Anansi to Mr. Ant.

"I know your tricks, Anansi," replied Ant. "You want to be rid of it."

Mr. Ant, who was an honest fellow, and always kept his own promises, believed him. He took the box on his head, and Anansi hurried off. Needless to say, the sly fellow had not the least intention of keeping his word. Mr. Ant waited in vain for his return—and was obliged to wander all the rest of his life with the box in his head. That is the reason we so often see ants carrying great bundles as they hurry along.


Next: Why Spiders Are Always Found in Corners of Ceilings 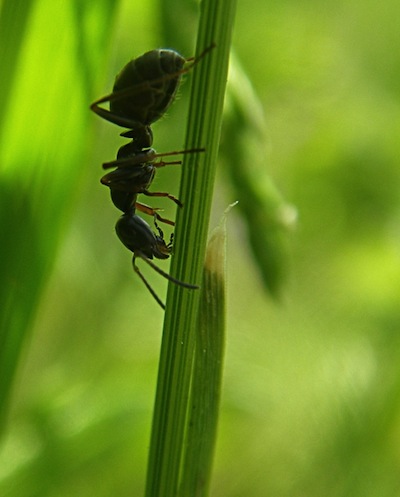