Beowulf: The End of Beowulf


The End of Beowulf

Then at last to his aid came Wiglaf the faithful, and Beowulf's ears were gladdened by the sound of his dear friend's shout, and new strength streamed through his veins. Together they fought, side by side, and the dragon gave way to their onslaught.

But in one wide sweep of the dragon's tail Beowulf was caught, and he sank to the ground broken, at last, in body. But Wiglaf, fresh in the fray, with a great cry of rage, found the weak spot in the dragon's armor and into the heart of the beast sank his good sword to the hilt.

No sound came from the dragon. But he rose to his full and terrible height in great majesty of dying, and fell prone beside Beowulf.

Then there went up a shout from the cowardly earls who had hidden in the forest to watch the fight in safety, and they crowded about their dying king. But Wiglaf drove them away, saying: "Away, wretches of faithlessness! Not for you the honors of a battle you feared to engage in. Away, cowards! Our king is done to death in a noble adventure to save you and your foul breed from the dragon's wrath."

Then turning to Beowulf, he knelt at his side, took him dying into his arms, and loosened the helmet from his brow. 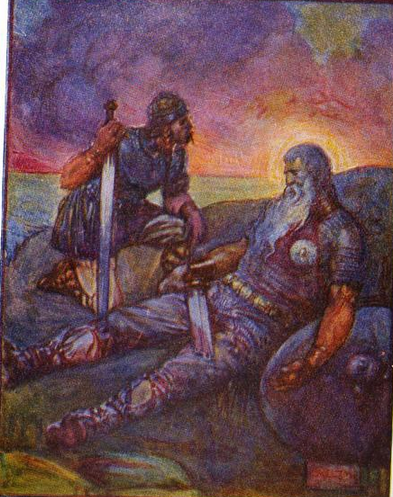 "O my dear master," he cried over him, "leave us not in your hour of triumph!"

Then Wiglaf went into the dragon's barrow and beheld there the greatest treasure, surely, in all the wide world. And he selected from the heaped-up gold and jewels a wondrous crown of glittering gems, and this he placed upon the brow of his king.

"I die," whispered Beowulf, "and I forgive those others — those foolish ones who deserted me in my hour. Farewell, good Wiglaf, my own true friend. Make a barrow for me upon the Whale's Headland. Farewell . . .and now I shall sleep ... the longest sleep."

And so died Beowulf, greatest and truest of all the early heroes of legend. 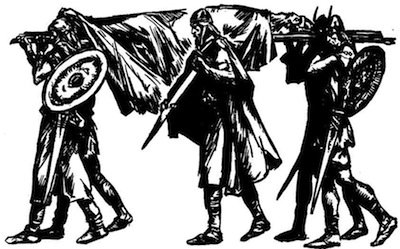 THEY carried his body to the Whale's Headland where a great barrow was made for him, and Wiglaf ordered all the treasure of the dragon's cave to be brought that it should burn most rightly upon the funeral pyre of Beowulf the king. And so great was their sense of the fitness of this, and their sorrow at loss of their excellent lord, that not one of the cowardly earls lifted his voice in protest against Wiglaf's order. 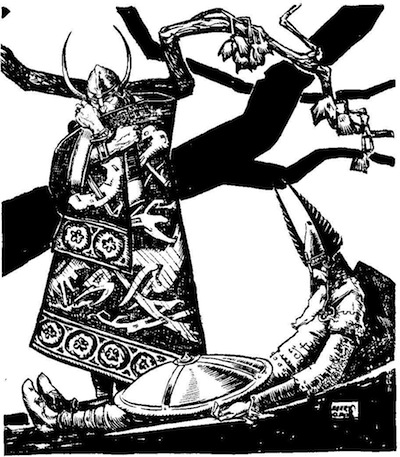 From far and near the men and women of Geatsland gathered to honor and mourn their dead lord and marvel at the great bulk of the dragon.

And beside the huge barrow upon the Whale's Headland, above the darkling sea, many hands raised a vast funeral pyre of scented logs and evergreen boughs.

Then the dragon was dragged to the precipice, and, when it fell into the gray sea far, far below, a loud shout went up from a hundred throats as it slipped to the lonely waves.

They brought Beowulf's body to the pyre. He was borne upon his mighty shield, the great sword Naegling was laid upon his breast, and the jeweled crown from the cave was on his brow, and he was carried upon the shoulders of six earls. 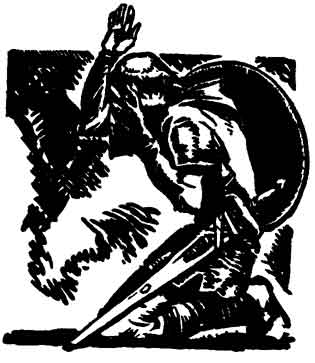 Behind the bier walked fifty barons of Geatsland, the highest and mightiest in all the North, and following them, fifty musicians, with horns and pipes, making a doleful music.

Three times the sad procession marched around the high pyre, and the music rang out clear and loud, and the weeping multitude fell upon its knees.

Darkness came down upon the land, and the sound of the waves beneath the Whale's Headland grew more and more insistent, as though the sea, remembering Beowulf's early mastery of it, lamented also his passing.

Now, at the last, Beowulf was laid upon the sweet-scented pyre, and all about him were heaped the countless treasures from the dragon's mound. Then Wiglaf approached with two flaming torches, to do the dead king honor. Proclaiming the greatness of his dear lord, he held high above his head the flares and plunged them into the pyre. The flames leaped up, staining crimson the dark night, and so great was the glare from the burning that the stars put out their light, and the sea stopped its sad mourning.

Higher and higher rose the flames and with them the lamentations of the people. And the noble earls took up again their sad marching about the burning pyre, and all night long they marched, until at long last there was nothing left of the pyre but a high mound of gray ashes in the gray dawn.

THUS passed to his own gods Beowulf, King of Geatsland, in the North.