Beowulf: Battle with the Dragon

Battle with the Dragon

It was quite dark now as they neared the spot, and through the dim night they beheld in the distance a reddish glow. Nearer they came until, peering through the dense wood, they saw a broad clear space among the trees.

At one side was an old burial-mound, and at its entrance there issued in hissing gusts the red steam of the dragon's hot breathing. All about the place, the snow was trampled by huge feet and the tree trunks were blackened and scorched.

Then brave Beowulf drew his earls about him and said to them: "I go alone to engage this dragon. You shall remain here at the clearing's edge in readiness to stand by me in case I fail. For I am an old man now, and it comes to me, as in a dream, that this will be my last adventure, my final fight."

Then, gripping his vast shield of iron surely in his left hand and in his right the noble sword Naegling, Beowulf advanced to meet the dragon.

But his earls, all those trusted earls, save only that faithful and loving lord Wiglaf, were seized with a sudden fear and fled away into the darkness of the night and the shelter of the encircling forests. King Beowulf did not see their fleeing, as his eyes were upon the mouth of the barrow, and his ears were dimmed by the noise of the dragon's breathing and the swishswish of the angry body within the cave's fastness.

Then Beowulf cried out in a ringing voice: "Come out, O most foul fiend, for Beowulf, King of Geatsland, Prince of Weders, and son of great Ecgtheow, stands without and calls you to battle. Come out, I say, arch-dragon, and pit your vaunted strength against my strength, which is the greatest known in all this cold Northland!"

And Wiglaf, standing ready and alone at the circle's edge, laughed a clarion challenge to the dragon's undoing.

For a moment there was a death-like stillness in the night. No sound came from the cave, and no steamy breath, and no dull glare of fire. Then with sudden roaring that caused the night to splinter and the earth to quiver in horrified response, the lordliest dragon in all the world rushed from its lair.

Over ten ells in length it measured from the proud head to the poisoned tail-tip, and its vast body was covered with scales of brass as big as plates and thicker, each, than three fingers. Its forefeet were armed with six-inch claws of razor edge and helped support a head so large and terrible that Beowulf marveled for a moment at the size. Its eyes were of green fire, its wide nostrils belched red flame and steam, and the immense jaws dripped livid ooze as they snapped in hideous savagery. So great was the issuing heat that Beowulf held up his shield, else he would have perished upon the spot. 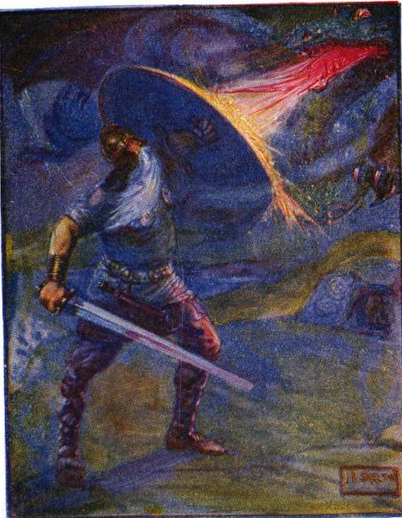 
Again came a moment's pause while the two antagonists stood firm and eyed each other, each gauging his own strength and that of his adversary.

Battle came upon them with the swiftness of lightning. The still forest was filled with the clamor of their combat. Beowulf slashed out bravely, but his good sword Naegling glanced helplessly against the brazen scales of the dragon's armor, and so great was the heat of the creature's breath that Beowulf was forced to resort to cunning in an attempt both to wear out his enemy and keep himself from being burned to death.

He wove this way and that, feinting now here, now there, until the dragon was so bewildered with this wonderful display of agility that his roaring grew louder and more terrible, and the violent swing of his huge body grew wider and wilder. Trees fell to earth at the flick of his tail, the snow melted beneath his breath, and his green eyes bit through the steamclouds of his breathing.

And always Beowulf fought for the advantage of a well-placed thrust of his sword, for he knew that every dragon has its vulnerable spot, and this he sought to find.

Back and forth over the hard ground they raged. Now the dragon seemed the victor and Beowulf spent and weakening — but only to renew his attack.

And time stood still in the black night, and the stars in their courses stayed to watch this struggle of giants.

Beowulf's breath came short and stifled, his arms grew weak from the weight of his great sword and shield, and this last grew so hot that it no longer served to protect him from the living furnace which he fought. His strong legs shook beneath him, and short cries were wrung from his throat. The encircling trees swam before his faltering eyes, the heavens seemed to close down upon him.

Next: The End of Beowulf