Now, all the while that the Wanderer was singing, Beowulf sat as one bewitched. Those about him paid no heed to his rapid breathing and failed to notice the light that had sprung into his blue eyes.

He leaned forward upon the table, his arms folded under his still beardless chin, his eyes fixed upon the minstrel. Now and again he lifted his head and shook out the fair hair that hung beneath the golden band encircling his wide white forehead. The huge bracelets that weighted his wrists gleamed like his eyes, and the jeweled collar about his throat was tight because of the swelling veins of his neck.

The thoughts that ran through his head were confused, but one idea held sway over all others: he would seek out this monster Grendel and slay him — yes! Slay him with bare hands, these very hands that gripped each other now upon the table until they showed white beneath the pressure of the fingers. His muscles under the armlets of beaten gold rippled like water ruffled by a breeze. He saw himself face to face with the monster Grendel, and suddenly a wild cry broke from his lips and he leaped from his seat. 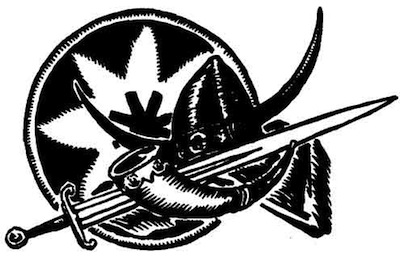 "Lords of Geatsland and earls of Hygelac," he shouted as the minstrel finished the song, "I am the son of Ecgtheow and of Hygelac's sister, and in olden times this Hrothgar was a war-brother of my father. Therefore I claim kinship to him, and I will go to the land of the Danes and serve their king. I will slay this Grendel!"

Then among the lords of Geatsland there rose a murmur of wonder at Beowulf's daring, but their wonder was touched with mockery that the Sluggard should dream of combat with such a fiend as Grendel. And they knew not whether to laugh or to shout with approval when they saw this youth, who had but lately come to manhood, standing before them, his eyes flashing fire, both hands up-flung.

There was great confusion in the hall of Hygelac, and the earls called to one another, and dogs barked. But Hygd the queen stood up amid the turmoil and, holding a jeweled cup in her two hands because of its weight, stepped down to where Beowulf was, and offered him the cup, and smiled at him in affection and pride. 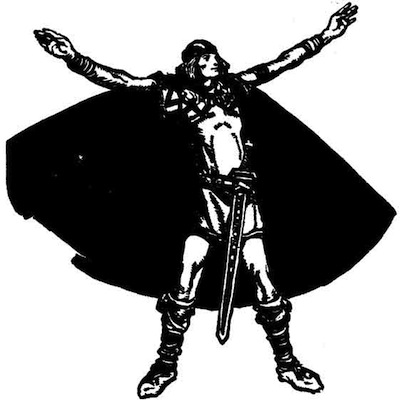 Once again Hygelac commanded silence among the guests in the drinking-hall, and turning to Beowulf said in a loud voice: "The time has come, O Beowulf, for you to prove your worth. The gods have gifted you with the strength of thirty men, and this strength you should use to the advantage of your fellows. Our neighbor Hrothgar is in sore need. Go forth, then, from Geatsland to the land of the Danes and do mortal combat with this Grendel-fiend to the glory of Geatsland and the satisfaction of your new manhood. But I charge you, Beowulf, son of Ecgtheow, earl of the Geats, and my own nephew, return not to these halls if you should fail in your attempt. Again I say to you, you have great strength. Go you, Beowulf, and use it nobly!"

Thus spoke Hygelac the king, and great was the shout of approval that went up from all the lords of Geatsland as they crowded round the brave young Beowulf. For here was a Beowulf they had never known before, and they greeted him for the first time as one of themselves, and not as a sullen boy whose strength had been so great that he had been made to seem a fool for it.

Then Beowulf drank from the jeweled goblet of Hygd, called the Wise and Fair, and he fell on his knees before his uncle Hygelac and received the king's embrace.