FOR seven days and seven nights, there were great preparations in the halls of Hygelac the Geat that Beowulf might go on his adventure fully equipped for whatever awaited him in Daneland. From the group of companions who had come to manhood at the same time as himself, Beowulf selected fourteen earls to accompany him.

He had wished to go alone to the land of the Danes, but his uncle the king had commanded that he be suitably companioned on such a voyage so that at the court of Hrothgar it could not be said that Hygelac had sent the youth upon a fool's errand and badly equipped. So, with the best grace he could muster (for Beowulf was stubborn, as you have seen and shall see again), he named his earls, and Hygelac ordered that they be furnished with the finest head-pieces and spears and swords in the kingdom. 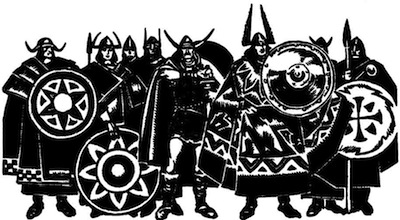 Special shields were made of stout wood covered with thick hides and bound with iron and studded with golden nails. Rich cloaks of scarlet and blue there were for the warriors, and massive bracelets of fine gold for their arms and wrists, and collars of gold wire for their throats.

When at last they stood ready in the mead-hall of Hygelac, they were a fine company of young men whose like was not to be seen in all the countries of the North. Each stood well over six feet in height, with broad shoulders and sturdy legs, and each was as swift of foot as a reindeer.

But Beowulf overtopped them all in stature and in strength and in the speed of his running, and as Hygd beheld him she thought: "This is indeed a fine son that my husband's sister was mother to, and his father Ecgtheow would have been a proud man to look upon him."

Hygelac made a speech to the fourteen earls and charged them to be faithful to Beowulf and to the tradition of the Geats in battle. He put them under the command of Beowulf and urged them to obey their lord in every particular and to find no service too difficult to render him and no hardship too great to endure for his sake.

Then he turned to Beowulf and gave the earls into the young man's keeping and begged him to uphold the honor of Geatsland and of his king. Then he nodded to Hygd, who stood beside him clad in a marvelous soft robe of red, her lovely arms covered with bracelets of green gems, and took from her hands a golden collar which he clasped about the throat of his nephew. As Beowulf knelt to receive the gift, a great shout went up from the assembled company, swords were brandished in the air, and there was a tumult of excitement in the high hall of Hygelac.

Then came the signal for the journey down to the beach where a ship lay in readiness to receive Beowulf and his earls, and, with torches flaming in the grayness of approaching dawn, the company took its departure.

THE way led for a little time through woodland cleared of all underbrush, where at night and in the light of the flares the company seemed to be passing through some vast mysterious dwelling-place; so tall were the trees that their tops could not be seen, and the tree trunks looked like the mighty pillars of a huge hall.

As they passed, the birds that slept in the branches of the trees wakened because of the light, and thought it must be daytime, and flew about calling to one another that the dawn had come. And the little animals scurried underfoot, not knowing what to make of this strange disturbance, and squeaking or growling to warn their small comrades.

At last the hall-like forest gave way to a wide open meadow, and the breath of the sea, damp and salt-smelling, struck the nostrils of the marching warriors. And finally they heard the waves breaking against the headlands not far away, and the moaning of the wind among the rocks of the coast.

As the first streaks of dawn began to touch the dim sky, the company reached the shore.

There, ghostly in the half-light, hung their ship, its prow nosing into the sandy beach, its body rising and falling with the gentle waves of the landlocked cove. Then, as the sun began to touch the towering mountains that hemmed them in, the torches were one by one extinguished.

The wind died suddenly, as it does at sunrise, and the wide sails of the ship hung motionless in the calm. But when the sun at last rose and flooded the world with its warm light, a fresh breeze sprang up.

Beowulf called to the company to hasten aboard, and, with much shouting and waving of arms and shields, the fourteen earls clambered into the ship. The vessel was loosed from her moorings, her painted oars were dipped into the water, her sails bellied with the young wind, and slowly she found her way down the harbor to the open sea.

Next: Beowulf Lands in Daneland 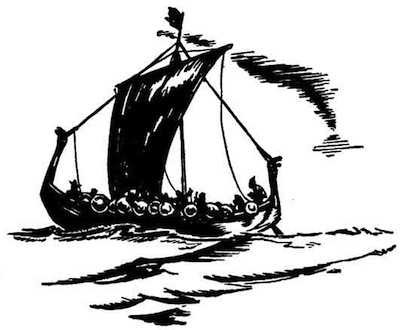