Again he looked below, and this time he saw in the far depths a ruddy glow as from, this time, a real fire of coals. He found himself sinking more rapidly now, and the water lay more lightly about him.

He looked up, trying to pierce the blue gloom through which he had come, but as he looked, something seized him about the waist fiercely, and, before he could recover from this new attack, he found himself swiftly dragged into a glowing cave, brilliantly lighted from a great fire on a hearth, and clinging to his body the most loathsome hag he had ever beheld.

Her hair was a growth of long hissing snakes that twisted and writhed about her head. Her face was almost completely hidden by them, and all he could see was a hideous gaping mouth filled with sharp green fangs and eyes that burned at him like live silver.

He was clutched by bony arms covered with thick rank hair, and the powerful lean body of the hag was clothed in strips of blackened fish-skins, foul-smelling and slimy.

She was of great height, Beowulf saw, but so bent was she that he looked down into her eyes, gleaming through the knotted coils of serpents. Her great jaws snapped at him, and a horrid slime dripped from her purple lips.

All this Beowulf saw in a moment as he stood in her vicious grip, and while she devoured him with her eyes, he had time to gauge his position.

The fire in the waterless cave burned on an open hearth, and the place curved high above them as though within a giant bowl. The floor was covered with black sand, dry underfoot. And in a far corner, Beowulf saw a massive shape which he knew to be Grendel.

The snakes of the monster-mother's hair hissed at him, her breath came hot and evil upon his face, and so slimy was her foul lean body that he could not hold her.

Her great claw-fingers sank into his flesh, his skin crept with the sickening touch of her, and they struggled there at the bottom of the world, in a cave under the water, and the great heart of Beowulf smothered him in his breast with a fear that was like nothing he had ever felt. Sweat poured from him, his legs melted under him like wax, and there was a spell upon him that drained him of all strength.

He managed to draw his sword Hrunting, but so protected by magic was that mother of Grendel that, try as he would, Hrunting would not pierce her body and at last clattered to the floor from his numb hand. The fiend twisted this way and that, and, with each twist, the horrible hands reached nearer and nearer to his throat, and he grew weaker and weaker, and shorter and faster came his stifled breath. 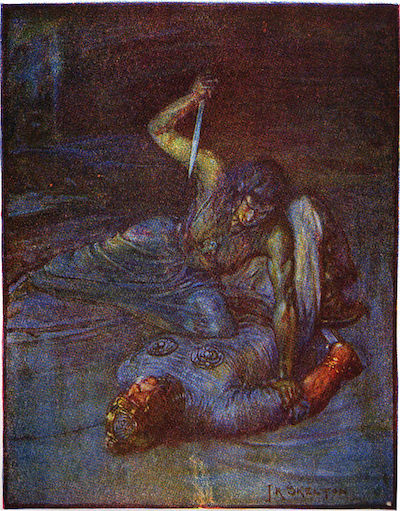 He managed to lock his leg round one of the monster's, and then, with all his fast-fleeing strength, he seized the hag and threw her. But in falling, she fell upon him, and now the loathsome, grinning jaws were close above his face, and the sharp claws found his throat.

But for a moment, the smallest moment in the world, she relaxed her hold, so sure was she of her prey, and in that little moment, the magic was lifted, and Beowulf, with a great cry, hurled her from him.

Once more on his feet, he staggered to the wall of the cave and found, suddenly, in his grasp, the hilt of an old sword which was driven deep into the wall. But the fiend was on him again now with a strangled cry of terror. Beowulf clutched the old sword with both hands and, with a great heave, drew it from the wall, and so great was the force of the blow he struck Grendel's mother that he cut clean through her body.

Then all the spells dropped from him, and he stood panting above the dead monster. And he saw that the fire of the hearth had leaped high to the roof of the cave. Quickly Beowulf cut off Grendel's head where he lay in the corner of the cave, and then threw the two bodies to the flames.

Holding in one strong hand the head of Grendel, and in the other the magic sword he had found, Beowulf ran to the entrance of the cave and surged up through the black night of the water.

But on his way up, he noticed that he was no longer attacked by the water-beasts and fish, while in his hand the blade of the magic sword, dissolved by the poison blood of Grendel's mother, melted away until only the carven hilt remained in his grasp.

Up, up, up through the dark waters he floated, and all about him was a silence red from the blood of his victims.