Persian Tales: The Man Who Went to Wake His Luck

This is a funny little story about a man who is not only without luck — he is also a big fool too!

Explore: For a story about someone who is very lucky, even if he is a bit of a fool, see Muhammad Tirandaz, The Archer. For another story about Luck that can be awake or asleep, see The Merchant and the Saffron.

The Man Who Went to Wake His Luck 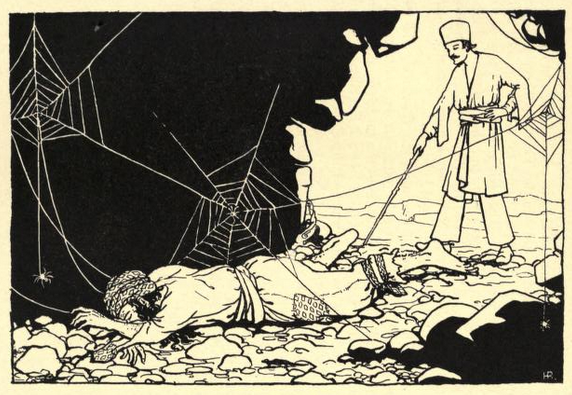 There were once two brothers, one of whom was very rich and the other very poor. One day the latter went to the mountain where his brother's herds of horses were. When he got there he found that two or three of the mares had foaled, and he noticed that a man in a black felt coat was rounding them up and grazing them.

The Poor Brother went up to the Horseherd and said: "Who are you, and what right have you to graze these horses of my brother's?"

The Horseherd replied: "I am your brother's Luck."

"Have you seen my Luck anywhere? I believe he's asleep. I wish he would wake up."

Tell me where I can find him," said the Poor Brother, "and I'll go and wake him myself."

"He's asleep in such and such a cave," said the Horseherd.

So the Poor Brother started off, and went on his way till he came to a place where there was a garden. The Gardener asked him where he was going to, and he said he was going to look for his Luck and wake him.

So the Gardener said: "Tell your Luck that I have a garden that yields no fruit, and ask him what the reason of that is."

Then the Poor Brother went on till he came to a certain mountain where the people had a King who was a woman, but they didn't know that she was a woman. The King learned of the Poor Brother's quest, and sent for him, and said: "When you wake your Luck, ask him why these people of mine don't obey my orders."

Then the Poor Brother went on again and fell in with a Wolf, and the Wolf said: "Ask him why I get nothing to live on."

Next he came to a thorn-gatherer cutting thorn-bushes for fuel, and he said: "Ask why I have been condemned to earn my daily bread by gathering thorns."

And to them all the Poor Brother replied: "All right, I'll ask."

Then he went on till he came to a cave where he found his Luck lying on his face sound asleep. He prodded him with his toe, and his Luck woke up and said: "What is it? What do you want?"

"But I'm due to sleep for some years yet."

"But won't you wake up now? Several people have given me messages for you."

"All right, go ahead and tell me what the messages are."

So the Poor Brother asked his Luck the Gardener's question. "Tell him," his Luck replied, "that there are four earthenware jars full of gold coins hidden in his garden; he must dig them up and then his garden will yield fruit."

Then the Poor Brother repeated the King's question, and his Luck answered: "Say to him: 'You are a woman, that's the reason why people don't obey you.' "

After that he told his Luck what the thorn-gatherer and the Wolf had asked, and his Luck answered: "Tell the thorn-gatherer that as long as he lives things will go on just the same with him, neither better nor worse. And say to the Wolf: 'Whenever you meet a foolish man, eat him. That's the provision that has been made for you.'"

The Poor Brother took leave of his Luck and started on his way home, and he came to the thorn-gatherer and gave him his answer.

Then he came to the King and said: "You are a woman." The King said: "Very good! Come along and I'll marry you, and this kingdom of mine shall be yours." "No," said the Poor Brother, "you don't catch me staying here. Now that I have seen my Luck, do you think I'd be such a fool?"

Then he went on till he found the Gardener, and told him about the four jars of gold coins that were hidden in his garden, and that if he dug them out the garden would become fruitful. The Gardener at once said: "Excellent! Come along and let's get them out and share them between us." But the Poor Brother said: "No, I won't stay."

So he went on, and he came at last to the Wolf and gave him his answer: "Whenever you see a foolish man, eat him. That is your portion."

"Thank you very much," said the Wolf. "I say, just look up a moment and see how many stars there are in the sky."

The Poor Brother looked up, and the Wolf immediately seized him by the throat, saying: "I have seen no greater fool than you!"

And then the Wolf ate the Poor Brother up.


Next: Tortoise Bowl-On-The-Back and the Fox