For more about the peris (fairies) of Persian folklore, see Wikipedia. As often in love stories about fairies, the ending is anything but a fairy-tale "happily ever after," as you will see.

Fayiz and the Peri Wife 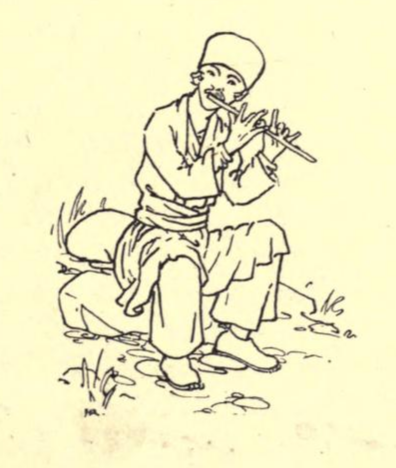 There was a married man called Fayiz, who was true-hearted and honest, and, moreover, a very handsome young man.

One day he went to the mountains with the flocks, and as he sat there he played on his flute. Presently he saw a maiden come and sit down beside him, and her face was so beautiful that no one had ever seen the like.

They fell in love with each other, and the girl said: "O young man, I am entirely yours; come now, and let us go to my house in the mountains."

"Tell me who you are," said Fayiz.

"All in good time," answered she, "but what business is it of yours?"

Then they got up and went off together. They came to a place where there was a fine building with beautiful carpets on the floors, and there were a number of slave-girls standing about with their hands on their breasts. Fayiz and the maiden sat down and talked to each other, and then she sent for a mulla. The mulla made his appearance, and when Fayiz looked at him and at the girl, he saw that they were not like ordinary human beings.

"O mulla," said the maiden, "wed me to this young man on condition that he will remain faithful to me. If he does, he will be happy all his life, but if he is unfaithful, then throughout his life he will never see me again, and he will be constantly in trouble. It is, indeed, scarcely possible that a human being should keep faith. However, we shall see how things turn out."

The mulla married them, and they settled down to disport and enjoy themselves. Some years passed thus and they had two sons, and the father perceived that they were of Peri stock.

One day the wife said: "Oh man-born, if ever a day comes that you make my secret public, you will never see me again, nor your sons. So I warn you that you must not break faith."

"Never while I live," protested Fayiz, "will I betray your secret."

At last, however, came a time when a yearning for his home and his belongings took possession of him, and he could not be at peace. "O Peri," said he, "longing for my country has seized me. Give me leave now to go to my home and see what state my property is in, and have a look at those other children of mine."

"O man-born," cried she, "you will go and you will regret it. For you will betray my secret, and then you will never see me again. I know this for certain, but I will not make you unhappy. All the same, you are doing wrong."

On this she recited something, and he found that they were sitting in the old place with the flocks. "Well, have you got there?" said the Peri.

"Well, you may go to your home and stay there as long as you like, only do not forget to keep my secret. If you tell it to any one, all is over between us."

He said good-bye, and set off down the hill and came to his home.

His boys came out to meet him and he kissed their faces, and all his relations came to call on him.

"Where have you been away to," they asked, "all these years you were with the flock?"

But he only answered: "Oh, I went somewhere." He stayed at home some days. Now the Peri was with him and was able to see him, but Fayiz did not see her.

At last his wife worried and worried him, saying: "Do tell me where you went to, and who gave you all this wealth and property you possess."

"If you tell me," said she, "well and good, I swear to you that I won't tell anyone else; but if you don't tell me, I'll kill myself."

When the time came for him to go back to his place he said: "O wife, I am going now, you can do what you please with this wealth and property and these boys of yours."

"Tell me where you're going," said she, "or I'll turn your boys adrift."

He could find no way out of the difficulty, "For," said he, "if I don't tell her, she will abandon my boys and go away."

So Fayiz acted like an ass, for God had willed that he should not again see the face of the Peri, and he told his wife the whole story.

Suddenly he heard a voice saying: "O faithless man-born! All is now at an end between us. Didn't I tell you not to divulge my secret? Now you will neither see me again nor your sons."

Then she took on the shape of a pigeon and flew away, and went home to her sons and settled down in peace and comfort.

But Fayiz went to the place where he had first met her. Several days he came and went there, but he saw nothing. "No, she will not appear again," said he.

Still he came every day and played on his flute and sang songs, but he saw nothing. And at night he used to sit down in a corner among some ruins and sing till morning. And he cast off his first wife and her sons and never went to their house. In fact, he broke free from all the ties of this world, and he used continually to sing:

Peri, Peri, shame on me
If I an earthly wife should see,
And with her contented be,
Or cease to sigh and long for thee.