Story of the Day: Why the Sun is Bright

Here is today's story: Why the Sun is Bright. This is a legend from the Lil'wat people; find out more at Wikipedia. You can read more aetiology stories from Native American traditions, and more stories about the sun too. 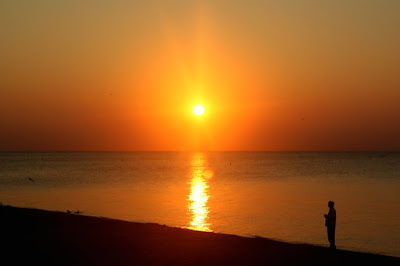 WHY THE SUN IS BRIGHT

Once a whole village moved away. They were angry with a boy, so they left him behind with his grandmother. Now it looked as though they would starve.

So the boy snared rabbits and squirrels and many small animals. He shot many birds with bright plumage.

Grandmother cooked the animals and birds, but she made him a robe from the skins of the birds. The robe was very large and bright. The boy wore it when he went to spear fish.

Now Sun, when he followed the trail in the Sky Land, saw the robe when the boy was spearing fish. He saw that robe many times.

One day Sun left the trail and came to visit the boy. Sun always dressed in a goatskin robe, with long fringe.

Sun said to the boy, "I will exchange blankets with you."

The boy looked at the goatskin robe, and said, "Oh, no!"

Sun said, "You do not know the value of my robe. It can catch more fish than you can spear."

Sun placed the fringe of his blanket in the water, and at once a fish caught on each tip of the fringe.

When the boy saw that, he exchanged blankets at once.

Before Sun traded for the boy's robe of birds' plumage, he was pale, and his light was like the light of the moon. Therefore people could look at him.

Now he became bright and dazzling as he is today, because of his bright robe. People can no longer look at him.

Story Title: Why the Sun is Bright
Book Title: Myths and legends of British North America
Author: Katharine Berry Judson
Published: 1917
Rights: CC0 Public Domain
Online Source: Hathi
Process: Light editing for paragraphing and punctuation.
Additional Notes: This is a legend of the St'at'imc people of what is now British Columbia; they are also known as Lillooet or Lil'wat. You can read more about them at Wikipedia.