Story of the Day: Why the Wren Does not Fly High 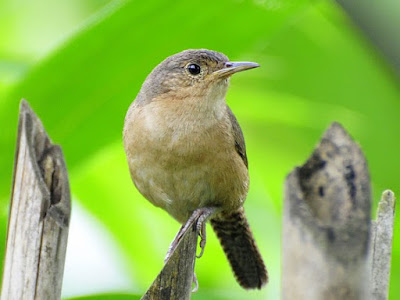 WHY THE WREN DOES NOT FLY HIGH

The eagle and the wren once had a contest as to who should be king of the air. At the time appointed for the trial of strength they began to soar, and whichever went the highest was to be king.

After they had gone a few feet up, the wren placed herself on the back of the eagle, and she was so light that he did not know she was there.

After the eagle had flown as high as he could go, he called out, "Where are you, Mr. Wren?"

Then the wren flew about six feet above him and answered, "I am the highest!"

For her falsehood she was told she should always fly low.

Story Title: Why the Wren Does not Fly High
Book Title: Strange ways and sweet dreams: Afro-American folklore from the Hampton Institute
Author: Waters, Donald J.
Published: 1983
Rights: CC0 Public Domain
Online Source: Hathi Trust
Prior Source: Southern Workman 28, no. 3 (March 1899)
Process: Light editing for paragraphing and punctuation.
Additional Notes: Often the trickster in a contest wins the contest, but this story is unusual in that the wren is punished in the end for her trick.
Posted by Laura Gibbs