Raja Rasalu: How He Killed the Giants

This story is part of the Raja Rasalu unit. Story source: Tales of the Punjab by Flora Annie Steel, with illustrations by J. Lockwood Kipling (1894). 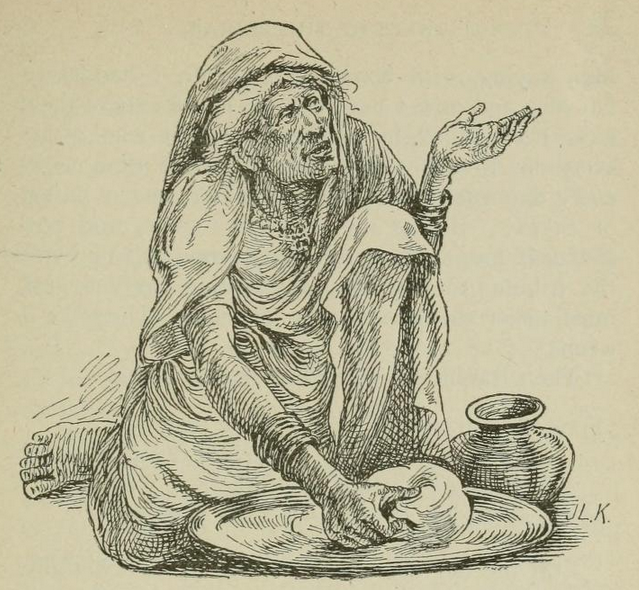 How Raja Rasalu Killed the Giants

NOW after a time, Raja Rasalu arrived at Nila city and, as he entered the town, he saw an old woman making unleavened bread, and as she made it, she sometimes wept and sometimes laughed, so Rasalu asked her why she wept and laughed, but she answered sadly as she kneaded her cakes, "Why do you ask? What will you gain by it?"

"Nay, mother!" replied Rasalu; "if you tell me the truth, one of us must benefit by it."

And when the old woman looked in Rasalu's face she saw that it was kind, so she opened her heart to him, saying, with tears, "O stranger, I had seven fair sons, and now I have but one left, for six of them have been killed by a dreadful giant who comes every day to this city to receive tribute from us — every day a fair young man, a buffalo, and a basket of cakes! Six of my sons have gone, and now today it has once more fallen to my lot to provide the tribute; and my boy, my darling, my youngest, must meet the fate of his brothers. Therefore I weep!"

Then Rasalu was moved to pity and said,

"Fond, foolish mother! Cease these tears—
Keep thou thy son. I fear nor death nor life,
Seeking my fortune everywhere in strife.
My head for his I give! So calm your fears."

Still the old woman shook her head doubtfully, saying, "Fair words, fair words! But who will really risk his life for another?"

Then Rasalu smiled at her and, dismounting from his gallant steed, Bhaunr Iraqi, he sat down carelessly to rest, as if indeed he were a son of the house, and said, "Fear not, mother! I give you my word of honour that I will risk my life to save your son."

Just then the high officials of the city, whose duty it was to claim the giant's tribute, appeared in sight, and the old woman fell a-weeping once more, saying,

"O Prince, with the gallant gray steed and the turban bound high
O'er thy fair bearded face, keep thy word; my oppressor draws nigh!"

Then Raja Rasalu rose in his shining armour and haughtily bade the guards stand aside.

"Fair words!" replied the chief officer; "but if this woman does not send the tribute at once, the giants will come and disturb the whole city. Her son must go!"

"I go in his stead!" quoth Rasalu more haughtily still. "Stand back, and let me pass!"

Then, despite their denials, he mounted his horse and, taking the basket of cakes and the buffalo, he set off to find the giant, bidding the buffalo show him the shortest road. 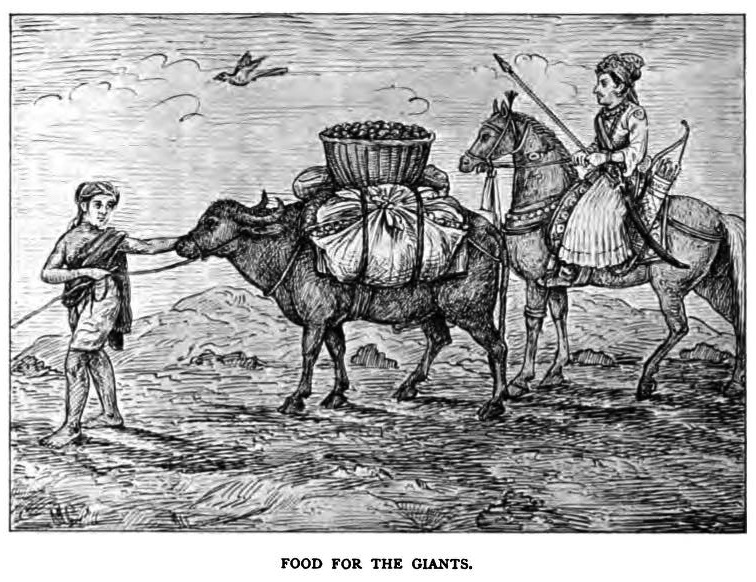 Now, as he came near the giants' house, he met one of them carrying a huge skinful of water. No sooner did the water-carrier giant see Raja Rasalu riding along on his horse Bhaunr Iraqi and leading the buffalo than he said to himself, "Oho! we have a horse extra to-day! I think I will eat it myself, before my brothers see it!"

Then he reached out his hand, but Rasalu drew his sharp sword and smote the giant's hand off at a blow, so that he fled from him in great fear.

Now, as he fled, he met his sister the giantess, who called out to him, "Brother, whither away so fast?" 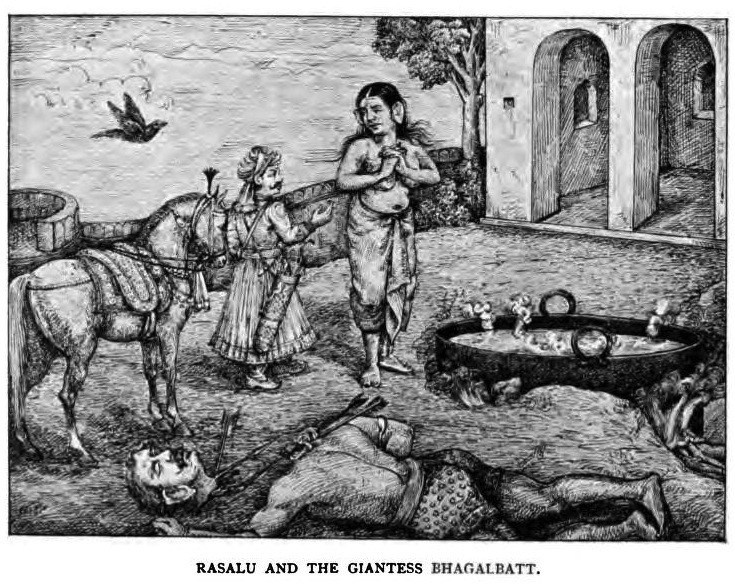 And the giant answered in haste, "Raja Rasalu has come at last, and see! He has cut off my hand with one blow of his sword!"

Then the giantess, overcome with fear, fled with her brother, and as they fled they called aloud—

"Fly! brethren, fly!
Take the path that is nearest;
The fire burns high
That will scorch up our dearest!
Life's joys we have seen:
East and west we must wander!
What has been, has been;
Quick! Some remedy ponder."

Then all the giants turned and fled to their astrologer brother and bade him look in his books to see if Raja Rasalu were really born into the world. And when they heard that he was, they prepared to fly east and west, but even as they turned, Raja Rasalu rode up on Bhaunr Iraqi and challenged them to fight, saying, "Come forth, for I am Rasalu, son of Raja Salbahan, and born enemy of the giants!"

Then one of the giants tried to brazen it out, saying, "I have eaten many Rasalus like you! When the real man comes, his horse's heel-ropes will bind us and his sword cut us up of their own accord!"

Then Raja Rasalu loosed his heel-ropes, and dropped his sword upon the ground, and lo! the heel-ropes bound the giants, and the sword cut them in pieces.

Still, seven giants who were left tried to brazen it out, saying, "Aha! We have eaten many Rasalus like you! When the real man comes, his arrow will pierce seven girdles placed one behind the other."

But the giantess, their sister, escaped, and fled to a cave in the Gandgari mountains. Then Raja Rasalu had a statue made in his likeness and clad it in shining armour, with sword and spear and shield. And he placed it as a sentinel at the entrance of the cave, so that the giantess dared not come forth, but starved to death inside.

So this is how he killed the giants. 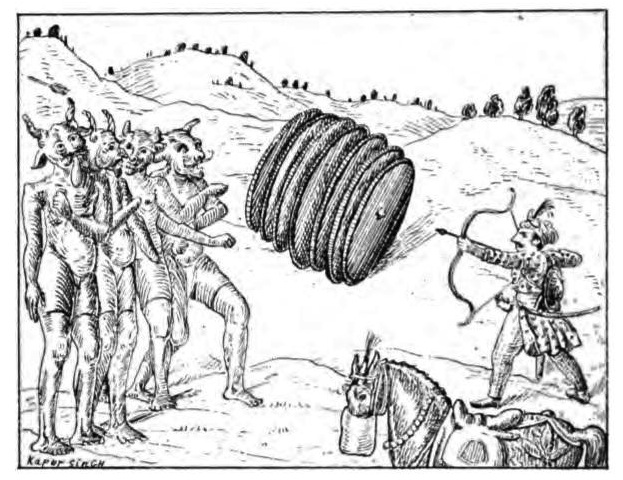 Next: How He Became a Jogi