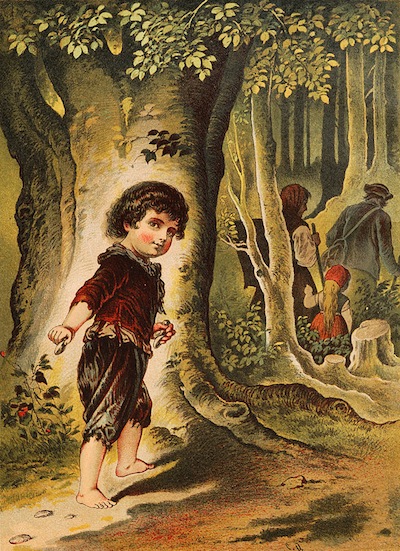 They walked the whole night long, and by break of day came once more to their father's house. They knocked at the door, and when the woman opened it and saw that it was Hansel and Grethel, she said, "You naughty children, why have you slept so long in the forest? We thought you were never coming back at all!"

The father, however, rejoiced, for it had cut him to the heart to leave them behind alone.

Not long afterwards, there was once more great scarcity in all parts, and the children heard their mother saying at night to their father, "Everything is eaten again; we have one half loaf left, and after that there is an end. The children must go; we will take them farther into the wood so that they will not find their way out again — there is no other means of saving ourselves!"

The man's heart was heavy, and he thought, "It would be better for thee to share the last mouthful with thy children."

The woman, however, would listen to nothing that he had to say, but scolded and reproached him. He who says A must say B likewise, and as he had yielded the first time, he had to do so a second time also.

The children were, however, still awake and had heard the conversation. When the old folks were asleep, Hansel again got up and wanted to go out and pick up pebbles as he had done before, but the woman had locked the door, and Hansel could not get out. Nevertheless he comforted his little sister and said, "Do not cry, Grethel; go to sleep quietly — the good God will help us."

Early in the morning came the woman and took the children out of their beds. Their bit of bread was given to them, but it was still smaller than the time before. On the way into the forest, Hansel crumbled his in his pocket, and often stood still and threw a morsel on the ground.

"Hansel, why dost thou stop and look round?" said the father; "go on."

"I am looking back at my little pigeon, which is sitting on the roof and wants to say good-bye to me," answered Hansel.

"Simpleton!" said the woman. "That is not thy little pigeon; that is the morning sun that is shining on the chimney."

Hansel, however, little by little, threw all the crumbs on the path.

The woman led the children still deeper into the forest, where they had never in their lives been before. Then a great fire was again made, and the mother said, "Just sit there, you children, and when you are tired you may sleep a little; we are going into the forest to cut wood, and in the evening when we are done, we will come and fetch you away."

When it was noon, Grethel shared her piece of bread with Hansel, who had scattered his by the way. Then they fell asleep, and evening came and went, but no one came to the poor children.

They did not awake until it was dark night, and Hansel comforted his little sister and said, "Just wait, Grethel, until the moon rises, and then we shall see the crumbs of bread which I have strewn about; they will show us our way home again."

When the moon came, they set out, but they found no crumbs, for the many thousands of birds which fly about in the woods and fields had picked them all up.

Hansel said to Grethel, "We shall soon find the way," but they did not find it.

They walked the whole night and all the next day, too, from morning till evening, but they did not get out of the forest and were very hungry, for they had nothing to eat but two or three berries which grew on the ground. And as they were so weary that their legs would carry them no longer, they lay down beneath a tree and fell asleep.

Next: Hansel and Grethel (cont. again)