Tales of a Parrot: The King of Kinoje and his Daughter

An important character in this story is the "royroyan," also spelled "roy royan" or "ray raiyan" who was the chief Indian officer in the British revenue departments of the Indian states.


The King of Kinoje and his Daughter, with whom a Dirveish Became Enamoured

When the sun sunk beneath the west and the moon arose from the east, Khojisteh, completely decked and ornamented, went to the parrot to ask leave, saying, "I am ashamed to appear before you and that you should have so much trouble for my sake; you neither sleep nor take rest; how shall I thank you for your favours? How can my tongue perform and utter it?"

The parrot answered, "I am your slave, although by no means able to execute any business of yours in a manner becoming a servant; however, I will speedily send you to your lover and exert myself in your cause, like the royroyan, whose story you may have heard."

Khojisteh asked, "What is the nature of the story?"

The king of Kinoje had a daughter, whose face was as fair as the moon, and her features exceedingly beautiful. It happened that a dirveish fell in love with her, and from this passion became mad and senseless. Whenever he had lucid intervals, he would say to himself, "What a folly is this! How can a beggar be related to a monarch?"

After some days the dirveish sent a message to the king, "Give me your daughter because I have a great regard for her; consider not my poverty and your own royalty."

The king, on hearing these words of the dirveish, was violently enraged, and gave orders for him to be punished.

The vizier said, "He is a dirveish, and your Majesty never distresses dirveishes; I will contrive some other means of sending him out of the city."

Afterwards the vizier sent for the dirveish and said to him, "If you will bring an elephant load of gold, I will deliver to you the king's daughter." 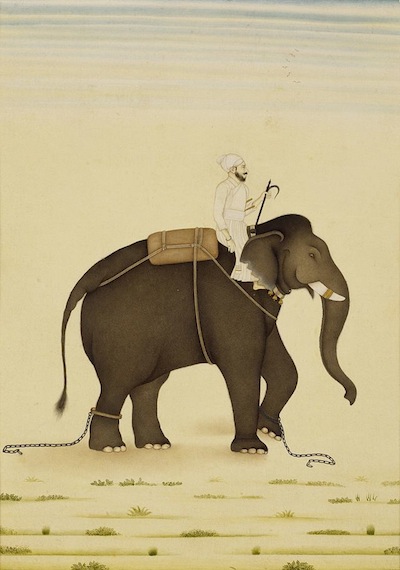 When the dirveish was considering how to procure the money, a person said to him, "If you require as much gold as an elephant can carry, go to the royroyan, represent your situation, and ask; when he will certainly bestow on you this quantity of gold."

The dirveish went to the royroyan, and set forth his case. The royroyan immediately bestowed on the dirveish an elephant-load of gold, which he carried to the rajah.

The rajah said to the vizier, "Your scheme has not succeeded, for the dirveish has brought the elephant-load of gold."

The vizier said, "The royroyan must have given it; in these days no other person is capable of performing such an act of munificence; now, some other plan must be pursued."

The vizier said to the dirveish, "You will not obtain the rajah's daughter in exchange for an elephant-load of gold; but if you bring the royroyan's head, certainly you shall have her."

The dirveish went again to the royroyan and told the circumstances of his case. The royroyan said, "Set your mind at rest and be not uneasy about my head; for many years I have kept my head in my hand, ready to be given to whosoever should require it. Do you tie a rope round my neck and carry me before the rajah, and say, "I have brought the head which you required, together with its body; if he consents, separate my head from my body, and should he demand any thing further, I will manage it also."

The dirveish did so and, having tied a rope round the neck of the royroyan, carried him before the rajah. When the rajah saw the generosity of the royroyan, he fell at his feet and said, "No man in this world exceeds you in greatness of mind and manliness, nor will there ever be one willing to devote his own head for the satisfaction of a beggar, a dirveish."

The rajah sent for his own daughter and, presenting her to the royroyan, said, "This is your handmaid; dispose of her to whomever you please."

When the parrot had brought to a conclusion the story of the royroyan, he said to Khojisteh, "If my head can be of any service to you, my mistress, I will give it without hesitation or regret. It is adviseable that you should go speedily to your friend."

When Khojisteh stood up and wanted to have gone to her beloved, the cock crowed and, it being morning, her departure was deferred.


Next: The Fowler, the Parrot, and her Young Ones