While Buddhism began in India, it spread throughout Asia; you can read more about the history of Buddhism in Asia at Wikipedia (scroll down for a color-coded timeline that shows the spread of Buddhism by region).

[Notes by LKG]
This story is part of the The Monkey King unit. Story source: "The Ape Sun Wu Kung" in The Chinese Fairy Book, ed. by R. Wilhelm and translated by Frederick H. Martens (1921).

One day, when the King of the Apes sat with his subjects at a merry meal, he suddenly began to weep. Frightened, the apes asked him why he so suddenly grew sad amid all his bliss. Said the King: “It is true that we are not subject to the law and rule of man, that birds and beasts do not dare attack us, yet little by little we grow old and weak, and some day the hour will strike when Death, the Ancient, will drag us off! Then we are gone in a moment, and can no longer dwell upon earth!”

When the apes heard these words, they hid their faces and sobbed. But an old ape, whose arms were connected in such a way that he could add the length of one to that of the other, stepped forth from the ranks. In a loud tone of voice he said: “That you have hit upon this thought, O King, shows the desire to search for truth has awakened you! Among all living creatures, there are but three kinds who are exempt from Death’s power: the Buddhas, the blessed spirits and the gods. Whoever attains one of these three grades escapes the rod of rebirth, and lives as long as the Heavens themselves.”

The King of the Apes said: “Where do these three kinds of beings live?”

And the old ape replied: “They live in caves and on holy mountains in the great world of mortals.”

The King was pleased when he heard this and told his apes that he was going to seek out gods and sainted spirits in order to learn the road to immortality from them. The apes dragged up peaches and other fruits and sweet wine to celebrate the parting banquet, and all made merry together.

On the following morning the Handsome King of the Apes rose very early, built him a raft of old pine trees, and took a bamboo staff for a pole. Then he climbed on the raft, quite alone, and poled his way through the Great Sea.

Wind and waves were favorable and he reached Asia. There he went ashore. On the strand he met a fisherman. He at once stepped up to him, knocked him down, tore off his clothes and put them on himself.

Then he wandered around and visited all famous spots, went into the market-places, the densely populated cities, learned how to conduct himself properly, and how to speak and act like a well-bred human being. Yet his heart was set on learning the teaching of the Buddhas, the blessed spirits and the holy gods. But the people of the country in which he was were only concerned with honors and wealth. Not one of them seemed to care for life.

Thus he went about until nine years had passed by unnoticed. Then he came to the strand of the Western Sea. and it occurred to him: “No doubt there are gods and saints on the other side of the sea!”

So he built another raft, floated it over the Western Sea, and reached the land of the West. There he let his raft drift, and went ashore.

After he had searched for many days, he suddenly saw a high mountain with deep, quiet valleys. As the Ape King went toward it, he heard a man singing in the woods, and the song sounded like one the blessed spirits might sing. So he hastily entered the wood to see who might be singing.


Next: Sun Wu Kung Gets His Name 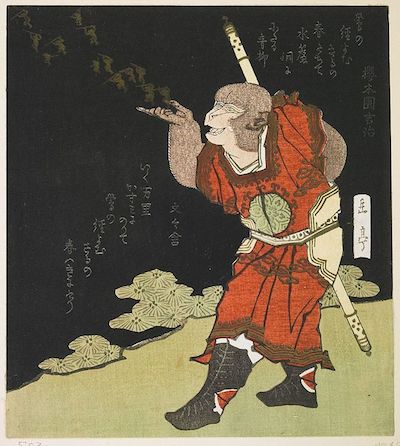