This story is part of the Voyages of Sindbad unit. Story source: The Arabian Nights' Entertainments by Andrew Lang and illustrated by H. J. Ford (1898). 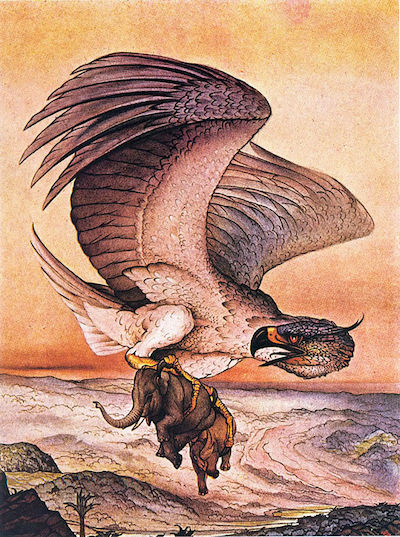 I had resolved, as you know, on my return from my first voyage, to spend the rest of my days quietly in Bagdad, but very soon I grew tired of such an idle life and longed once more to find myself upon the sea.

I procured, therefore, such goods as were suitable for the places I intended to visit, and embarked for the second time in a good ship with other merchants whom I knew to be honourable men. We went from island to island, often making excellent bargains, until one day we landed at a spot which, though covered with fruit trees and abounding in springs of excellent water, appeared to possess neither houses nor people. While my companions wandered here and there gathering flowers and fruit I sat down in a shady place, and, having heartily enjoyed the provisions and the wine I had brought with me, I fell asleep, lulled by the murmur of a clear brook which flowed close by.

How long I slept I know not, but when I opened my eyes and started to my feet I perceived with horror that I was alone and that the ship was gone. I rushed to and fro like one distracted, uttering cries of despair, and when from the shore I saw the vessel under full sail just disappearing upon the horizon, I wished bitterly enough that I had been content to stay at home in safety. But since wishes could do me no good, I presently took courage and looked about me for a means of escape. When I had climbed a tall tree I first of all directed my anxious glances towards the sea but, finding nothing hopeful there, I turned landward, and my curiosity was excited by a huge dazzling white object, so far off that I could not make out what it might be.

Descending from the tree, I hastily collected what remained of my provisions and set off as fast as I could go towards it. As I drew near it seemed to me to be a white ball of immense size and height, and when I could touch it, I found it marvellously smooth and soft. As it was impossible to climb it — for it presented no foot-hold — I walked round about it seeking some opening, but there was none. I counted, however, that it was at least fifty paces round.

By this time the sun was near setting, but quite suddenly it fell dark, something like a huge black cloud came swiftly over me, and I saw with amazement that it was a bird of extraordinary size which was hovering near. Then I remembered that I had often heard the sailors speak of a wonderful bird called a roc, and it occurred to me that the white object which had so puzzled me must be its egg.

Sure enough the bird settled slowly down upon it, covering it with its wings to keep it warm, and I cowered close beside the egg in such a position that one of the bird's feet, which was as large as the trunk of a tree, was just in front of me. Taking off my turban I bound myself securely to it with the linen in the hope that the roc, when it took flight next morning, would bear me away with it from the desolate island. And this was precisely what did happen. 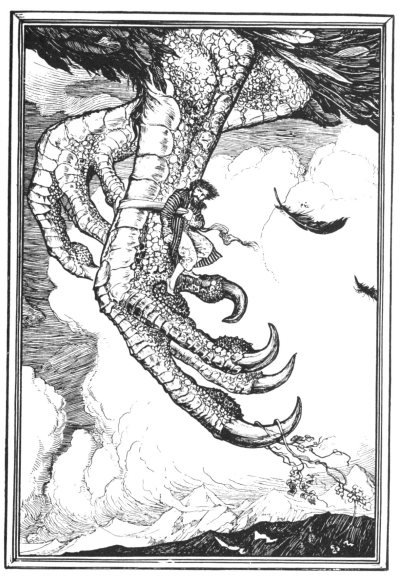 As soon as the dawn appeared the bird rose into the air carrying me up and up till I could no longer see the earth, and then suddenly it descended so swiftly that I almost lost consciousness. When I became aware that the roc had settled and that I was once again upon solid ground, I hastily unbound my turban from its foot and freed myself, and that not a moment too soon for the bird, pouncing upon a huge snake, killed it with a few blows from its powerful beak and, seizing it up, rose into the air once more and soon disappeared from my view. When I had looked about me I began to doubt if I had gained anything by quitting the desolate island. 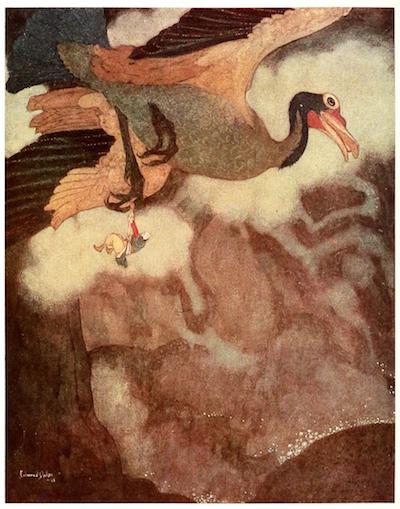 The valley in which I found myself was deep and narrow, and surrounded by mountains which towered into the clouds and were so steep and rocky that there was no way of climbing up their sides. As I wandered about, seeking anxiously for some means of escaping from this trap, I observed that the ground was strewed with diamonds, some of them of an astonishing size. This sight gave me great pleasure, but my delight was speedily damped when I saw also numbers of horrible snakes so long and so large that the smallest of them could have swallowed an elephant with ease. Fortunately for me they seemed to hide in caverns of the rocks by day, and only came out by night, probably because of their enemy the roc.

All day long I wandered up and down the valley, and when it grew dusk I crept into a little cave and, having blocked up the entrance to it with a stone, I ate part of my little store of food and lay down to sleep, but all through the night the serpents crawled to and fro, hissing horribly, so that I could scarcely close my eyes for terror.

I was thankful when the morning light appeared, and when I judged by the silence that the serpents had retreated to their dens, I came tremblingly out of my cave and wandered up and down the valley once more, kicking the diamonds contemptuously out of my path, for I felt that they were indeed vain things to a man in my situation. At last, overcome with weariness, I sat down upon a rock, but I had hardly closed my eyes when I was startled by something which fell to the ground with a thud close beside me. 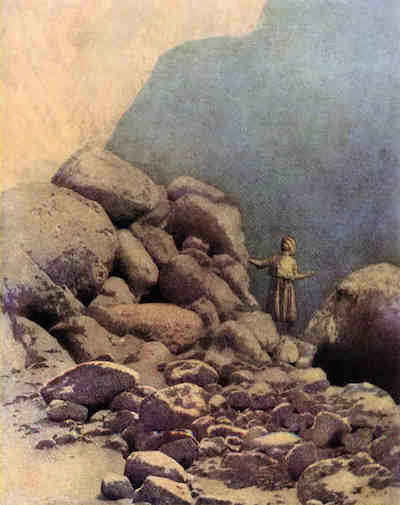 (Valley of Diamonds, by M. Parrish)