In this story, the names of the three fish express the essential idea of the story, so you are lucky that Ryder has translated them for you. In Sanskrit, their names are Anagatavidhata, Pratyutpannamati and Yadbhavishya. 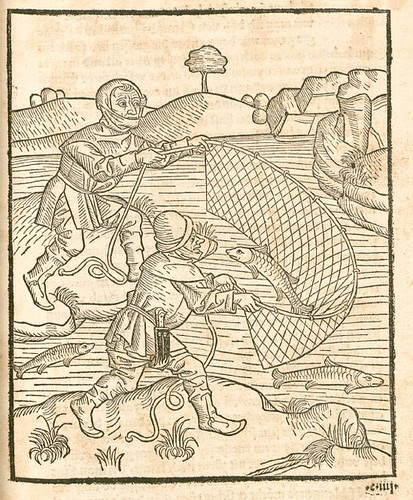 (from a 15th-century Latin Panchatantra)

Forethought, Ready-Wit, and Fatalist
(inside the story of The Plover)

In a great lake lived three full-grown fishes, whose names were Forethought, Ready-wit, and Fatalist. Now one day the fish named Forethought overheard passers-by on the bank and fishermen saying: "There are plenty of fish in this pond. Tomorrow we go fishing."

On hearing this, Forethought reflected: "This looks bad. Tomorrow or the day after they will be sure to come here. I will take Ready-wit and Fatalist and move to another lake whose waters are not troubled.'

So he called them and put the question. Thereupon Ready-wit said: "I have lived long in this lake and cannot move in such a hurry. If fishermen come here, then I will protect myself by some means devised for the occasion."

But poor, doomed Fatalist said: "There are sizable lakes elsewhere. Who knows whether they will come here or not? One should not abandon the lake of his birth merely because of such small gossip. And the proverb says:

Since scamp and sneak and snake
So often undertake
A plan that does not thrive,
The world wags on, alive.

"Therefore I am determined not to go."

And when Forethought realized that their minds were made up, he went to another body of water.

On the next day, when he had gone, the fishermen with their boys beset the inner pool, cast a net, and caught all the fish without exception.

Under these circumstances Ready-wit, while still in the water, played dead. And since they thought: "This big fellow died without help," they drew him from the net and laid him on the bank, from which he wriggled back to safety in the water.

But Fatalist stuck his nose into the meshes of the net, struggling until they pounded him repeatedly with clubs and so killed him.

And that is why I say:

"My dear," said the plover, "why do you think me like Fatalist?

Horses, elephants, and iron,
Water, woman, man,
Sticks and stones and clothes are built
On a different plan.

"Feel no anxiety. Who can bring humiliation upon you while my arms protect you?"

So Constance laid her eggs, but the ocean, who had listened to the previous conversation, thought: "Well, well! There is sense in the saying:

Of self-conceit all creatures show
An adequate supply:
The plover lies with claws upstretched
To prop the falling sky.

"I will just put his power to the test."

So the next day, when the two plovers had gone foraging, he made a long reach with his wave-hands and eagerly seized the eggs.

Then, when the hen-plover returned and found the nursery empty, she said to her husband: "See what has happened to poor me. The ocean seized my eggs today. I told you more than once that we should move, but you were stupid as Fatalist and would not go. Now I am so sad at the loss of my children that I have decided to burn myself."

"My dear," said the plover, "wait until you witness my power, until I dry up that rascally ocean with my bill."

But she replied: "My dear husband, how can you fight the ocean? Furthermore,

Gay simpletons who fight,
Not estimating right
The foe's power and their own,
Like moths in flame atone."

"My dear," said the plover, "you should not say such things.

The sun's new-risen beams
Upon the mountains fall:
Where glory is cognate,
Age matters not at all.

"With this bill I shall dry up the water to the last drop and turn the sea into dry land."

"Darling," said his wife, "with a bill that holds one drop how will you dry up the ocean, into which pour without ceasing the Ganges and the Indus, bearing the water of nine times nine hundred tributary streams? Why talk nonsense?"

But the plover said:

Success is rooted in the will;
And I possess an iron-strong bill;
Long days and nights before me lie:
Why should not ocean's flood go dry?

The highest glory to attain
Asks enterprise and manly strain:
The sun must first to Libra climb
Before he routs the cloudy time.

"Well," said his wife, "if you feel that you must make war on the ocean, at least call other birds to your aid before you begin. For the proverb says:

A host where each is weak
Brings victory to pass:
The elephant is bound
By woven ropes of grass.

"How was that?" asked Sprawl. And Constance told the story of . . . The Duel of the Elephant and the Sparrow.


Next: The Duel between Elephant and Sparrow