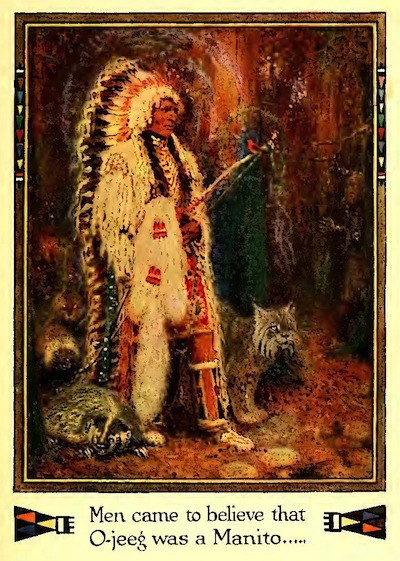 How the Summer Came (cont.)
[for audio, see previous page]

O-jeeg had a wife whom he dearly loved, and a son, of thirteen years, who promised to be as great a hunter as his father. Already he had shown great skill with the bow and arrow; if some accident should prevent O-jeeg from supplying the family with the game upon which they lived, his son felt sure that he himself could shoot as many squirrels and turkeys as they needed to keep them from starving. With O-jeeg to bring them venison, bear's meat and wild turkey, they had thus far plenty to eat. Had it not been for the cold, the boy would have been happy enough. They had warm clothing, made from deerskin and furs; to keep their fire burning, they had all the wood in the forest. Yet, in spite of this, the cold was a great trial, for it was always winter, and the deep snow never melted.

Some wise old men had somewhere heard that the sky was not only the roof of our own world, but also was the floor of a beautiful world beyond, a land where birds with bright feathers sang sweetly through a pleasant, warm season called Summer. It was a pretty story that people wished to believe, and likely enough they said, when you came to think that the sun was so far away from the earth, and so close to the sky itself.

The boy used to dream about it and wonder what could be done. His father could do anything; some men said he was a Manito. Perhaps he could find some way to bring Summer to the earth. That would be the greatest thing of all.

Sometimes it was so cold that when the boy went into the woods his fingers would be frost-bitten. Then he could not fit the notch of his arrow to the bowstring and was obliged to go back home without any game whatever. One day he had wandered far in the forest and was returning emptyhanded, when he saw a red squirrel seated on his hind-legs on the stump of a tree. The squirrel was gnawing a pine cone and did not try to run away when the young hunter came near.

Then the little animal spoke: "My grandson," said he, "there is something I wish to tell you that you will be pleased to hear. Put away your arrows and do not try to shoot me, and I shall give you some good advice."

The boy was surprised, but he unstrung his bow and put the arrow in his quiver.

"Now," said the squirrel, "listen carefully to what I have to say. The earth is always covered with snow, and the frost bites your fingers and makes you unhappy. I dislike the cold as much as you do. To tell the truth, there is little enough for me to eat in these woods, with the ground frozen hard all the time. You can see how thin I am, for there is not much to eat in a pine cone. If someone could manage to bring the Summer down from the sky, it would be a great blessing."

"Is it really true, then," asked the boy, "that up beyond the sky is a pleasant warm land where Winter only stays for a few moons?"

"Yes, it is true," said the squirrel. "We animals have known it for a long time. Ken-eu, the war-eagle, who soars near the sun, once saw a small crack in the sky. The crack was made by Way-wass-i-mo, the Lightning, in a great storm that covered all the earth with water. Ken-eu, the war-eagle, felt the warm air leaking through, but the people who live up above mended the crack the very next moment, and the sky has never leaked again."

"Then our wise old men were right," said the boy. "O-jeeg, my father, can do most anything he has a mind to. Do you suppose if he tried hard enough, he could get through the sky and bring the Summer down to us?"

"Of course!" exclaimed the squirrel. "That is why I spoke to you about it. Your father is a Manito. If you beg him hard enough and tell him how unhappy you are, he is sure to make the attempt. When you go back, show him your frostbitten fingers. Tell him how you tramp all day through the snow, and how difficult it is to make your way home. Tell him that some day you may be frozen stiff and never get back at all. Then he will do as you ask because he loves you very much."

The boy thanked the squirrel and promised to follow this advice. From that day he gave his father no peace.

At last O-jeeg said to him: "My son, what you ask me to do is a dangerous thing, and I do not know what may come of it. But my power as a Manito was given me for a good purpose, and I can put it to no better use than to try to bring the Summer down from the sky and make the world a more pleasant place to live in."

Then he prepared a feast to which he invited his friends, the otter, the beaver, the lynx, the badger, and the wolverine, and they all put their heads together to decide what was best to be done.

The lynx was the first to speak. He had travelled far on his long legs and had been to many strange places. Besides, if you had good strong eyes and you looked at the sky, on a clear night when there was no moon, you could see a little group of stars which the wise old men said was exactly like a lynx. It gave him a certain importance, especially in matters of this kind, so when he began to speak, the others listened with great respect.

"There is a high mountain," said he, "that none of you has ever seen. No one ever saw the top, because it is always hidden by the clouds, but I am told it is the highest mountain in the world and almost touches the sky."

The otter began to laugh. He is the only animal that can do this; sometimes he laughs for no particular reason, unless it is that he thinks himself more clever than the other animals and likes to show off.

"What are you laughing at?" asked the lynx.

"Oh, nothing," answered the otter. "I was just laughing."

"It will get you into trouble some day," said the lynx. "Just because you never heard of this mountain, you think it is not there."

"Do you know how to get to it?" asked O-jeeg. "If we could climb to the top, we might find a way to break through the sky. It seems a good plan."

"That is what I was thinking," said the lynx. "It is true I don't know just where it is. But a moon's journey from here, there lives a Manito who has the shape of a giant. He knows, and he could tell us."


Next: How the Summer Came (end)