This story is part of the Odyssey unit. Story source: Homer's Odyssey, translated into English by Tony Kline. (2004).

On reaching the shore, we dragged the vessel down to the glittering sea, and set up mast and sail in our black ship. Then we hauled the sheep aboard, and embarked ourselves, weeping, shedding huge tears. Still, Circe of the lovely tresses, dread goddess with a human voice, sent us a good companion to help us, a fresh wind from astern of our dark-prowed ship to fill the sail. And when we had set the tackle in order fore and aft, we sat down, and let the wind and the helmsman keep her course. All day long with straining sail she glided over the sea, till the sun set and all the waves grew dark.

So she came to the deep flowing Ocean that surrounds the earth, and the city and country of the Cimmerians, wrapped in cloud and mist. The bright sun never shines down on them with his rays neither by climbing the starry heavens nor turning back again towards earth, but instead dreadful Night looms over a wretched people. There we beached our ship, and landed the sheep, and made our way along the Ocean stream, till we came to the place Circe described.

Perimedes and Eurylochus restrained the sacrificial victims while I drew my sharp sword from its sheath, and with it dug a pit two foot square, then poured a libation all around to the dead, first of milk and honey, then of sweet wine, thirdly of water, sprinkled with white barley meal. Then I prayed devoutly to the powerless ghosts of the departed, swearing that when I reached Ithaca I would sacrifice a barren heifer in my palace, the best of the herd, and would heap the altar with rich spoils, and offer a ram, apart, to Teiresias, the finest jet-black ram in the flock. When, with prayers and vows, I had invoked the hosts of the dead, I led the sheep to the pit and cut their throats, so the dark blood flowed. 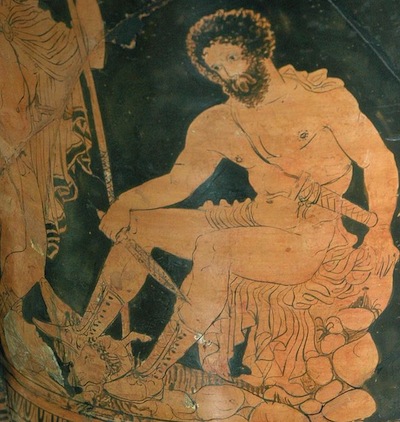 
Then the ghosts of the dead swarmed out of Erebus – brides, and young men yet unwed, old men worn out with toil, girls once vibrant and still new to grief, and ranks of warriors slain in battle, showing their wounds from bronze-tipped spears, their armour stained with blood. Round the pit from every side the crowd thronged, with strange cries, and I turned pale with fear. Then I called to my comrades, and told them to flay and burn the sheep killed by the pitiless bronze, with prayers to the divinities, to mighty Hades and dread Persephone. I myself, drawing my sharp sword from its sheath, sat there preventing the powerless ghosts from drawing near to the blood, till I might question Teiresias.


Next: The Ghosts of Elpenor and Teiresias